These Major Fashion Brands Are Banning Size 0 Requirements For Models 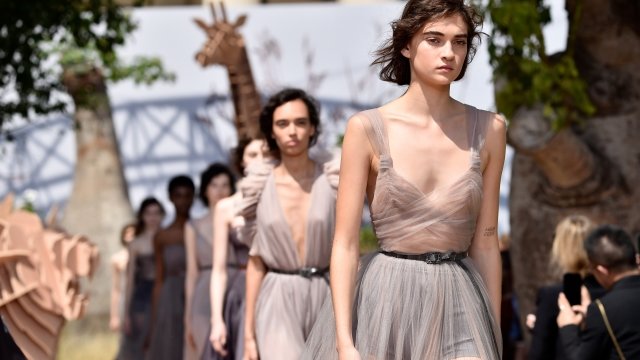 Major fashion brands are uniting to improve the well-being of models.

Luxury fashion groups Kering and LVMH — which together own brands like Louis Vuitton, Christian Dior and Gucci — wrote a charter to make sure their models work under safe conditions.

The charter bans size 0 casting requirements and requires agencies to prove models are healthy enough to work. On set, brands are also now required to provide psychologists or therapists for models while they're at work.

Other new rules in the charter guarantee models the right to safe accommodations and require they "explicitly accept" assignments that involve nudity or changes to their appearance.

These new rules come months after a pair of casting directors reportedly left 150 models waiting in a dark stairwell for hours during Paris Fashion Week. The incident was called "sadistic and cruel."

Magnetic Pulses Could Be A Key In Treating Anorexia

The treatment, known as rTMS, has already been approved for those who suffer from depression.

Balenciaga — which is owned by Kering — fired the accused casting directors and wrote a formal apology to affected modeling agencies. The fashion brand also vowed to ensure respectful working conditions in the future.

Plenty of studies from the past couple years have suggested that exposure to super-thin models in the media has a negative impact on women's mental health. And in a recent study about the pressure on models to lose weight, an overwhelming majority of the 85 models in the study were medically underweight.

More than half the models who participated in that study said they were told by someone in the modeling industry to lose weight or change their body shape.