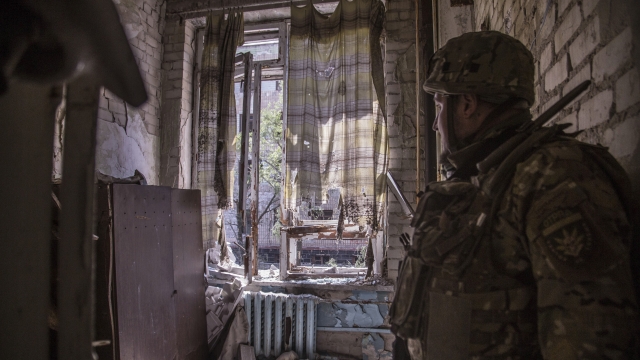 The plodding battle for Sievierodonetsk has devolved into street-to-street fighting that has been relatively rare.

Meanwhile, Russia claimed that it struck a training facility far from the front lines, west of the capital.

In the wake of a series of setbacks in the three-month-old war, Russia set its sights on the industrial Donbas region of coal mines and factories, where Moscow-backed separatists have been fighting Ukrainian troops for years and where they already held swaths of territory before the invasion.

But, as elsewhere, the Russian advance has not been as quick as expected, and the plodding battle for control of Sievierodonetsk has devolved into street-to-street fighting that has been relatively rare in the conflict.

"Fierce battles continue in the city itself, street battles are taking place with varied success in city blocks," Luhansk governor Serhiy Haidai told The Associated Press. "The army of Ukraine is fighting for every street and house."

Separately Thursday, Russia's Defense Ministry said it used air-launched missiles against a Ukrainian military base in the Zhytomyr region, to the west of Kyiv, alleging that mercenaries were being trained there.

Food Prices, Hunger On The Rise Around The World Amid War In Ukraine

Russian missiles are destroying warehouses and equipment and Russian warships and mines are blocking ports Ukraine needs to export grain.

There was no immediate comment from Ukrainian authorities to the Russian claims. Moscow has repeatedly accused Ukraine of using mercenaries in the fighting. Foreigners have fought as part of Ukraine's regular military and some have joined volunteer brigades, but it's unclear whether they're mercenaries.

Zhytomyr has periodically suffered missile strikes — but the vast majority of fighting and attacks have been concentrated in Ukraine's east.

Late Wednesday, Zelenskyy called the painstaking, inch-by-inch fight for Sievierodonetsk the "epicenter" of the battle for the Donbas and perhaps one of the most difficult battles of the war. The city is one of the last yet to be taken by the Russians in Luhansk, one of the two regions that make up the Donbas.

"In many ways, it is there that the fate of our Donbas is being decided," Zelenskyy said in his nightly video address, which was recorded in the street outside his office in Kyiv.

Oleksiy Arestovych, an adviser to Zelenskyy's office, said Tuesday that Russian forces have changed their tactics in the battle, retreating from Sievierodonetsk, while pounding it with artillery and airstrikes — without any particular success.

They are also targeting the neighboring city of Lysychansk with "day and night shelling," as well as trying to storm the key road connecting Lysychansk and Bakhmut to the southwest, he said.

Evidence of the enormous human cost of the war mounted as workers pulled up to 100 bodies from each smashed building in the devastated city of Mariupol — a gruesome effort that one official described as an "endless caravan of death."

Petro Andryushchenko, a mayoral aide in the Russian-held port city, said on the Telegram app that the bodies are being taken to a morgue, landfills and other places. At least 21,000 Mariupol civilians were killed during the weeks-long Russian siege, Ukrainian authorities have estimated.

Meanwhile, fears of a global food crisis escalated over Ukraine's inability to export millions of tons of grain through its blockaded ports.