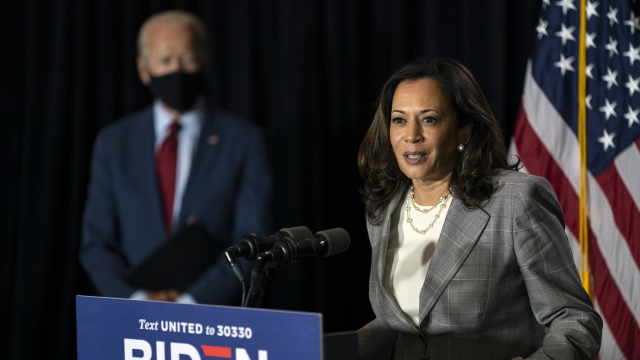 Supporters of Sen. Kamala Harris from the "#KHive" tell Newsy her Democratic National Convention speech gave them a new sense of inspiration moving toward the election.

"I thought it was a very searing speech in terms of being honest, being very frank about the challenges that we have as a country. But she said there's no vaccine for racism, and understanding that ... we are fighting multiple battles. But I also thought it was very aspirational, is very inspirational," says Reecie Colbert, founder of BlackWomenViews Media.

The speech was a long-awaited payoff for the #KHive — a group of dedicated Harris supporters who primarily organize across social media. Their origins go back to 2017 but greatly expanded during her 2020 presidential run.

"The way that Sen. Harris' campaign ran, it was just different and really kind of ahead of its time with respect to digital engagement," Alfred Johnson, CEO and co-founder of Mobilize, said. Mobilize is an event management and volunteer recruitment platform that’s worked with thousands of political campaigns, including Harris'. "From the beginning, they were thinking about the ways that they could first engage volunteers online, have them do something meaningful to the campaign. They had built this really large online group that were highly active."

Harris' 2020 presidential campaign ultimately fell short, ending before the Iowa caucuses. But The #KHive is now reinvigorated by her selection as VP —  uplifting Harris while also acting as a counterbalance to narratives pushed by critics or trolls.

"The #KHive really kind of came out of that space of seeing a Black woman that was only the second Black woman to serve in the U.S. Senate. She needs, as every Black woman elected official needs, their supporters to really come behind them, because we know racism and sexism are still the unwritten rules of the land," Kimberly Peeler-Allen, visiting practitioner at the Center for American Women and Politics at Rutgers University and co-founder of Higher Heights, said.

Peeler-Allen told Newsy that the relationship between Harris and the #KHive is so strong that the group could be used to hold the Biden campaign accountable.

"The urge to stick with the status quo and the same voices around the table is extremely strong. So it will take the #KHive and coalition work all across the board to make sure that Sen. Harris' voice is definitely heard and taken into consideration," Peeler-Allen said.

#KHive members told Newsy they plan to coordinate with the Biden campaign to get the pair elected.

"The beauty of KHive is that we are so diverse, we can really reach people where they are and reach them in a way to show them, to teach them, how Kamala will be there for them," Julie Zebrak, co-founder of Mamas4Kamala said.

They also said they plan to tackle misinformation about Harris head-on.

"Joe Biden gets his share of smears and attacks as well, and so that's one thing we help out with. But let's be honest, the primary target is still going to be Sen. Kamala Harris. I think nobody knows Kamala's record and her strengths more than we do. And nobody is better equipped to make sure that they can't use Kamala as a cudgel against Joe Biden," Colbert said.