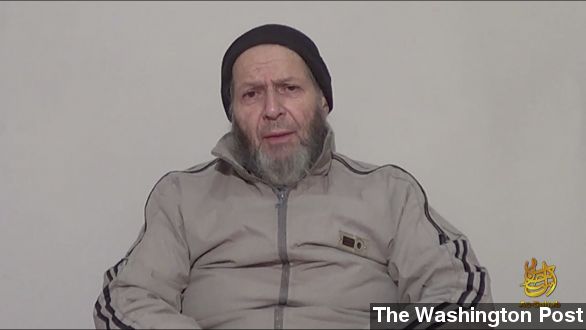 In the video reportedly released by Al-Qaeda, Warren Weinstein says he feels "abandoned" and asks the U.S. to help save him.

In the first piece of evidence in more than a year he's still alive, an American contractor kidnapped by Al-Qaeda pleads with President Obama to help him.

"Nine years ago, I came to Pakistan to help my government. And now when I need my government, it seems that I have been totally abandoned." (Via The Washington Post / As-Sahab)

That's 72-year-old Warren Weinstein, who was kidnapped in August 2011 while working as the director for J.E. Austin Associates in Pakistan. (Via The Huffington Post)

The Washington Post obtained a copy of the video Wednesday, which opens with a graphic addressing it to the president, U.S. Secretary of State John Kerry, media, the U.S. public and Weinstein's family.

The Post reports a member of the State Department said the government is trying to authenticate the contents of the video.

The video did include the watermark of As-Sahab, which is Al-Qaeda's media production house. (Via GlobalJihad.net)

A handwritten letter included with the message was dated Oct. 3. (Via The Washington Post)

"The years have taken their toll."

"This is the third video released of Weinstein since he was kidnapped — the latest showing a dramatic change of appearance. He seems to have aged considerably." (Via CNN)

During the 13-minute video, Weinstein encourages the American public to start a social media campaign to get him released. Al-Qaeda has previously demanded the U.S. release jihadist fighters and stop air raids in the Middle East in exchange for Weinstein.

Appealing directly to President Obama, Weinstein said, "You are now in your second term as president of the United States, and that means that you can make hard decisions without worrying about re-election."

The Obama administration says it will not negotiate with Al-Qaeda for Weinstein's release.