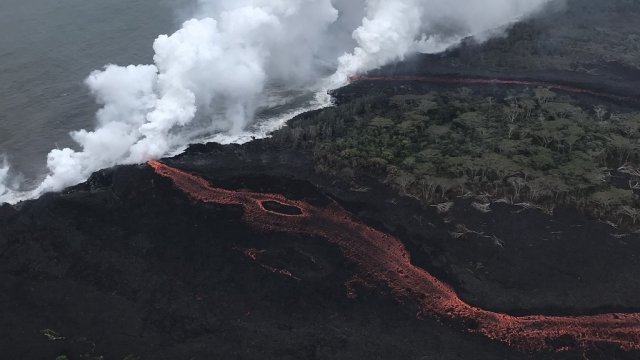 Officials in Hawaii were telling residents Monday to be ready to leave their neighborhood with little notice.

Officials in Hawaii are telling residents shifting wind could mean a forced evacuation with little notice as lava pours into the Pacific Ocean, creating a toxic gas.

Lava flows from the Big Island's Kilauea volcano reached the water over the weekend. The interaction of the lava and the water creates something called laze, a mix of hydrochloric acid, steam and tiny glass particles.

Lava flows reached the property of a geothermal facility Monday, according to local media. The Honolulu Star Advertiser said the facility had been closed since earlier this month. Reuters reported workers were trying to shut off wells at the plant Monday. If the lava were to get into one of those wells, it could spark an uncontrolled release of gas, according to the governor.

The eruption on the Big Island has injured at least one person and destroyed dozens of structures.