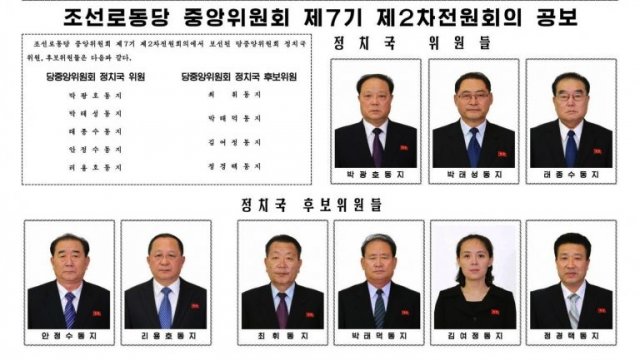 The younger Kim can be seen in glimpses on various North Korean news and propaganda videos. She's had a leading role in the Propaganda and Agitation Department and is said to be a close aide to her brother, planning his travel and public appearances, among other things.

North Korea Has A Massive Military, And It May Be Growing

A state-run newspaper reports nearly 5 million people volunteered to enlist or reenlist in the Korean People's Army in the past few days.

Her new role as an alternate member of the country's top decision-making body means she can now participate in politburo debates but can't vote.

Kim Jong-un's sister joins his wife, Ri Sol-ju, as one of the most prominent women in the isolated country. His sister's appointment also reveals her as a trusted party member.

Reports from 2014 suggest she was in charge for several weeks while her brother underwent ankle surgery. There's a possibility her promotion was made to strengthen the Kim family's grip on power.

Kim also recently promoted Foreign Minister Ri Yong-ho, who gave the North Korean rebuttal to President Donald Trump's U.N. speech. He was made a full member of the politburo.

Some experts see the political shuffle as a way for Kim Jong-un to break away from his father's lasting influence and advance his own policy. Kim Yo-jong took the place of her aunt, who was a key player while Kim Jong-il was in power.