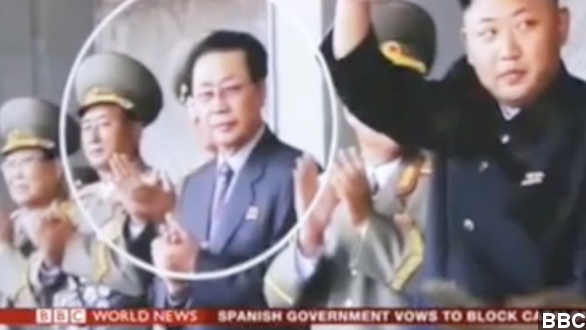 Kim Jong-un's uncle, who was previously considered the second most powerful man in North Korea, has been executed.

Kim Jong-un's uncle, who was previously considered the second most powerful man in North Korea, has been executed.

Jang Song Thaek has been killed, according to North Korean media. He was reportedly found guilty of treason at a military tribunal and sentenced to death. (Via WTIC)

The Korean Central News Agency called Jang "a traitor to the nation for all ages" and said he "did serious harm to the youth movement in our country, being part of the group of renegades and traitors in the field of youth work bribed by enemies." (Via USA Today)

"He was the guy who was given the responsibility of overseeing the transition to power from the father to the son ... which makes what's happened the last few days so striking." (Via BBC)

Headlines for the KCNA also called Jang Song Thaek a traitor and claimed he had political interests of his own. (Via NK News)

Jang Song Thaek's execution comes just days after he was removed from power by Kim Jong-un, who claimed his uncle was involved in drug activity, gambling and womanizing.

"Jang Song Thaek, who held senior political and military posts, was forcibly removed from a meeting over claims he'd committed criminal acts. It's the biggest change to the country's leadership since the death of former leader Kim Jong-il." (Via Sky News)

But executions of those previously close to North Korea's supreme leader aren't unheard of. In August, Kim Jong-un reportedly ordered the execution of his ex-girlfriend, Hyon Song-wol, by firing squad. (Via The Washington Times)

The KCNA did not report how or when Jang was executed.