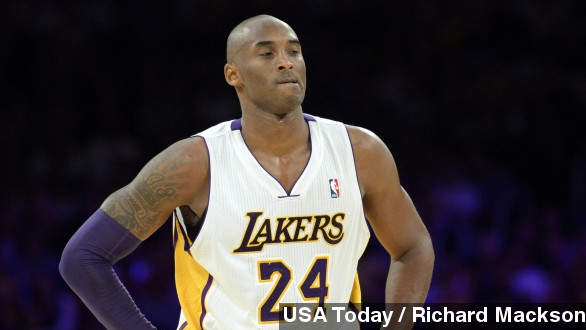 After suffering an Achilles injury in April, Kobe Bryant played six games before getting sidelined again, this time for a fractured knee.

Kobe Bryant's comeback to the Lakers lasted just six games. Now another injury will sideline him — this time for six weeks.

The Lakers announced on Twitter that Bryant will miss six weeks due to a lateral tibial plateau fracture in his left knee.

Bryant injured the knee in the third quarter Wednesday against the Memphis Grizzlies on this play, but at the time it appeared to be nothing more than a tweak. (Via Comcast SportsNet)

"Kind of a scary moment as Kobe Bryant and Tony Allen get tangled up. Kobe appears to aggravate his knee. He'd stay in the game, though. He'd return after the next timeout." (Via Fox Sports)

It's a big blow for not just the Lakers, but for 35-year-old Bryant, too, who returned for just six games this season after rehabbing from a torn Achilles injury earlier this year.

"Sometimes stress reactions on different parts of the body take place when you're dealing with other injuries and coming back from other things. ... It seems like Father Time, who is victorious against everyone, is looking at Kobe right now." (Via ESPN)

"You think that he tried to come back too fast and do too much?"

But for the Lakers, the tough news didn't stop there Thursday.

They also received word veteran point guard Steve Nash will be out an additional four weeks while rehabbing a back injury. Lakers Nation points out he was only supposed to be sidelined for two weeks but has been out for more than a month due to setbacks.

With all this injury news, L.A. will likely need to lean on big man Pau Gasol a little more, whom the Lakers were reportedly shopping around just earlier this month. (Via Bleacher Report)

So far this season, the Lakers have been fairly underwhelming, sitting at just 12-13. And this recent injury news certainly won't help.