Kobe Talks 'Rebirth,' But How Much Longer Can He Play? 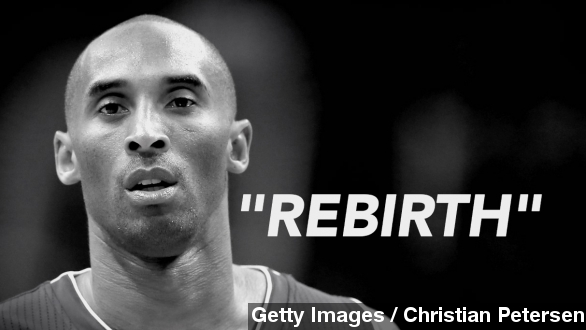 The NBA superstar has fallen on rough times in recent years but says he has no immediate plans for retirement.

But recently he's fallen on some tough times.

The past three seasons have seen the "Black Mamba" end the year sidelined due to injury.

In April of 2013, it was a torn achilles that kept him out of the playoffs and resulted in a first-round sweep at the hands of the Spurs.

In December of 2013, after returning for just six games, a knee fracture. It was expected to keep Bryant out for just six weeks, but that turned into the whole season.

And most recently, a torn rotator cuff took Bryant out of the All-Star game and, most likely, the rest of the 2014-2015 season.

Undeniably a tough run and one that would have had many NBA players, even superstars, hanging up their high-tops. But not Kobe.

In a recent interview with NBA TV's Ahmad Rashad, the 36-year-old NBA pro said the so-called 'Kobe Bryant era' is not over.

He told Rashad, "I can't say it is the end. I thought the Spurs were done 20 years ago. These guys are still winning. … So, I'm hoping I can have the same rebirth."

It's the kind of language we've come to expect from Kobe, who's notoriously fought through injuries throughout his career to stay on the court.

Most of the big names who came into the league with Bryant in the 1996 NBA Draft have hung it up already.

No. 1 pick Allen Iverson formally announced his retirement in 2013, though his career, which included one year playing in China, had sputtered years before that. (Video via Sports Desk)

No. 2 pick Marcus Camby, a one-time defensive player of the year, also saw his last NBA minutes in 2013. (Video via TheOvertimePage)

Veteran Ray Allen is still around, though he tends to play a reduced role these days. He's also currently a free agent. (Video via CNN)

Granted, all of those guys are a few years older than Bryant, who came to the league straight out of high school, but their careers might indicate where his is headed.

The player Bryant is most often compared to, Michael Jordan, played 15 seasons total and retired at age 40, though his career was split up by two, other short-lived retirements.

Outside of his health issues, Bryant also has to consider the team he's coming back to.

Star point guard Steve Nash and first round pick Julius Randle have been out nearly the entire season with injuries. That's sunk the Lakers to a dismal 13-40 record at the All-Star break. (Video via Grantland, Draft Express)

Those injuries aside, it appears Kobe still has faith the Lakers could pull it together in the offseason.

In the March 2015 issue of GQ, he said, "I know that (owners Jim and Jeanie Buss) are hell-bent about having a championship caliber team next season, as am I."

Kobe is signed with the Lakers through the 2015-2016 season, which according to some, he doesn't plan to play past then. He's also under contract for $25 million next season.

And he does have a life off the court, including the Kobe and Vanessa Bryant Family Foundation and a new company called Kobe Inc., that could keep him busy.

That is, if he can pull himself away from the game.

This video includes images from Getty Images and music from Broke For Free / CC BY 3.0.