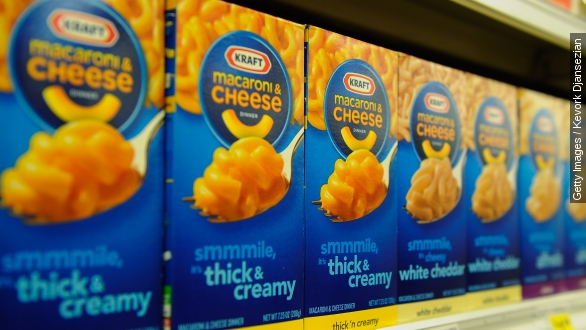 Kraft has decided to stop using yellow dyes in its macaroni and cheese products after health activists petitioned the company to cut the additives.

That's because Kraft will no longer be using artificial preservatives or synthetic colors starting January 2016 — specifically, Yellow 5 and Yellow 6.

Some argue that food dyes can cause hyperactivity disorder in children, but that remains a subject of debate in the scientific community.

USA Today reports a Kraft spokesman said the move isn't in response to pressure from activists to ditch the ingredients, and the company has been mulling changes for at least three years now.

But it was probably hard to ignore a Change.org petition with more than 350,000 signatures urging the company to stop using the dyes.

Plus, the company has already had to make changes in some parts of Europe where the dyes are banned due to health concerns.

Sales for additive-free and organic products have been on the rise. The Organic Trade Association says sales jumped 11 percent in 2014 to a record $39.1 billion.

Now the people behind the original Change.org petition are setting their sights on Kraft's entire product line and are aiming to get artificial dyes removed from items like Jell-O and Kool-Aid.

CORRECTION: A previous version of this video said U.S. consumers spent $39 million on organic products in 2014. Those sales actually totaled $39.1 billion. The video has been updated.