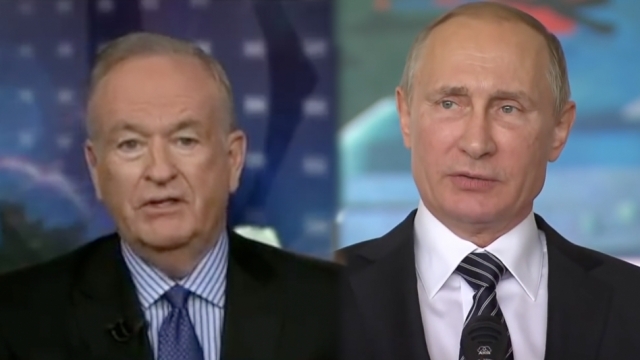 It stems from the network's recent interview with President Donald Trump.

"I do respect him," President Donald Trump said.

"Well, I respect a lot of people, but that doesn't mean I'm going to get along with him. He's a leader of his country. I say it's better to get along with Russia than not. And if Russia helps us in the fight against ISIS, which is a major fight, and Islamic terrorism all over the world — major fight — that's a good thing. Will I get along with him? I have no idea. Very possible I won't," Trump said.

While Trump's response to that question has been scrutinized here in the U.S., O'Reilly's use of a certain word has pissed off the Kremlin.

Yep, "killer." The Kremlin has demanded an apology from Fox News — and it's even hoping for an apology directed to Russian President Vladimir Putin, according to various media outlets.

Putin's spokesman reportedly called the use of the word "unacceptable" and "offensive."

A number of Putin's critics have wound up being killed over the years. The government has denied involvement in such killings.

Just last week, an opposition activist who survived a suspected poisoning in 2015 ended up back in the hospital. His wife told Radio Free Europe/Radio Liberty he has been diagnosed with "acute poisoning."

U.S. businesses will be able to make small transactions with the Russian Federal Security Service, an intelligence agency.

The activist, Vladimir Kara-Murza, suffered organ failure and was placed in a medically induced coma. His wife said he remains in the coma.

Trump and Putin spoke on the phone on Jan. 28. They discussed defeating ISIS and improving relations between the U.S. and Russia.

A meeting between the two is reportedly in the works for this summer.