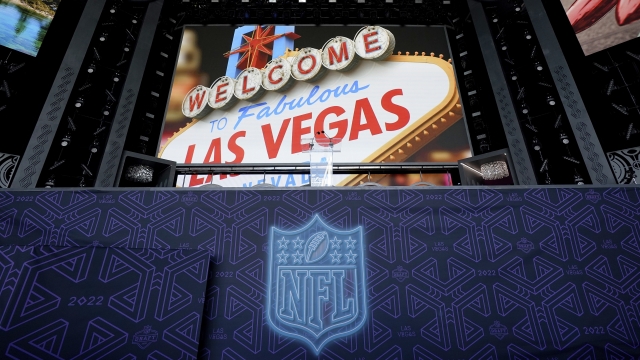 It's NFL draft day in Las Vegas, and people from all over the world are in town, eager to see how their favorite team shapes its future.

Taking over Las Vegas for the @NFLDraft 🤩 pic.twitter.com/bNKhC2VqZD

But if one thing is certain, it's that organizers in Vegas know how to throw a party. They had plans to launch 300 drones Wednesday night over the Bellagio fountains to form the logos of all 32 NFL teams. However, the event was canceled due to high winds. Instead, an impressive light show kept fans entertained and the NFL hopes to get the drones back up Thursday night.

Just down Las Vegas Boulevard — which has been temporarily renamed Draft Drive — the NFL fan experience is giving people the chance to meet some former and current players, run through drills and watch the red carpet action on the main stage Thursday night.

The first round of the draft kicks off Thursday at 8 p.m. ET. Rounds two through three will begin Friday at 7 p.m. ET. Then the draft will conclude with rounds four through seven beginning Saturday at 12 p.m. ET.