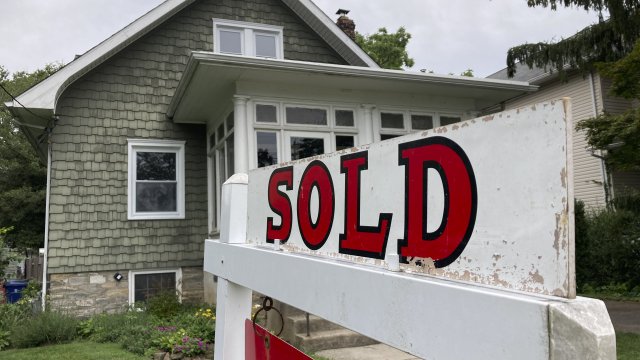 More than 650,000 Latinos became homeowners nationwide from 2019 to 2021and now over half of all Latino-Americans own a home.

LAS VEGAS (KTNV) — 700,000 Latinos live in Clark County, and many of them are buying homes. In fact, a recent report by the National Association of Hispanic Real Estate Professionals says Latinos across the country are buying homes more than ever before.

Today, nearly half of all Hispanics are homeowners. But are they buying in Las Vegas?

"I for sure wanted to have at least three bedrooms in the house," Hugo Organista told KTNV.

He bought a home last November. Organista says he came to Las Vegas after struggling to find something in the Phoenix area.

Housing Market Is Cooling Off, But Interest Rates May Pause Price Drop

Sellers are taking advantage of the market, driving down prices with more inventory, but interest rates might not make affordability better.

"(I) realized that I probably wasn't going to get what I wanted and placed four offers on a house there, got beat out by a cash buyer every time," Organista said.

Fortunately, he was able to scoop up a move-in-ready house near Boulder Highway and Tropicana Avenue. It's a dream the Mexican native says he still can't believe.

"When my family came here, we were eating pizza on the floor. We didn't even have enough for a dining room table," Organista said.

Organista said he was able to buy a home at a young age thanks to his mom. He credits her with teaching him how to work hard, save money and pay bills on time.

"You know, like she would drag me down to JC Penney's to go make a cash payment for her credit card because she didn't want it to be late. So, I kind of grew up with that in mind," he said.

In the Latino community, Organista isn't alone. More than 650,000 Latinos became homeowners nationwide from 2019 to 2021. A lot of them are buying in the Las Vegas valley, says Myra Rivera, with the local chapter of the National Association of Hispanic Real Estate Professionals.

"(In) 2021, we went up a little bit over 48 percent in Latino households, and that's projected to continue to go up," Rivera said. "I think in the last few years that I've been in business, and also just looking at the stats, those numbers have been increasing every single year."

"And in the next few years, we're going to see a lot of those Latinos come into the market because now they're ready. Their next step is finding a home," Rivera said.

Many interested homebuyers are looking here in Las Vegas because they want new construction, Rivera added.

"We get people from California coming in, used to the older homes, and they see Vegas homes mostly in the 2000s and they're like, Oh, wow, this is new," says Rivera.

Rivera admits it's still a tough market for some Hispanic families. Many still struggle with poor credit and are looking for homes at a lower price point.

"Latino households usually are larger. They have a lot of kids or their parents living with them. So, they need at least 3 to 5 bedrooms. Finding a house that's 3 to 5 bedrooms in that little price point... is sometimes a little difficult," says Rivera.

But Rivera is happy to see the situation is improving. She says many younger Latinos see the benefits to buying versus renting.

"You're starting to see the next generations or the next one in the family is buying younger or they're upgrading sooner... They see it as 'I'm investing, I'm upgrading. My family needs it.' They're not scared of the process," says Rivera.

Organista says it's encouraging to hear Latinos his age and younger are learning, anything is possible.

"It's a testament to what happens when we start to tackle systematic injustices... Knowledge is like step number one. That's like half the battle. Then the other half of that is actually putting it into practice," says Organista.

This story was originally published by Tricia Kean on ktnv.com.