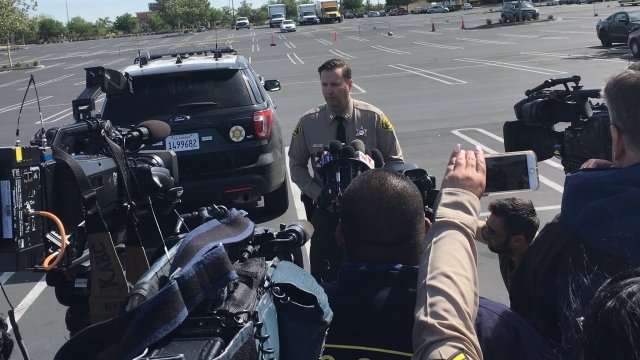 Officials touted their rapid response to a high school shooting near Los Angeles on Friday. One person was injured.

Authorities in Southern California say their response to reports of shots fired at a Palmdale high school worked. They suggest it could have kept the situation from getting worse.

"Unfortunately, that may be a result of why we were able to to put an end to this so quickly was this rapid deployment and rapid response," said Capt. Darren Harris of the Los Angeles County Sheriff's Department.

Law enforcement says a 15-year-old was shot in the arm. He went to the hospital, according to deputies, and is expected to recover. Deputies say a 14-year-old suspect was taken into custody after the shooting.

It wasn't clear Friday afternoon if the shooting happened outside or inside the school. Deputies say some students hadn't arrived yet since the incident happened before classes, around 7 a.m. local time.

Deputies say they also responded to reports of shots heard at an elementary school in Palmdale but quickly realized there was no threat. Officials cleared a lockdown at the high school late Friday morning.

"Palmdale sheriff's station trains for these types of incidents, so they were there quickly," Harris said. "They deployed quickly, and it looks like it worked as it should."