Pulling Out Of The TPP Proves Tough For Trump's Rural Voters 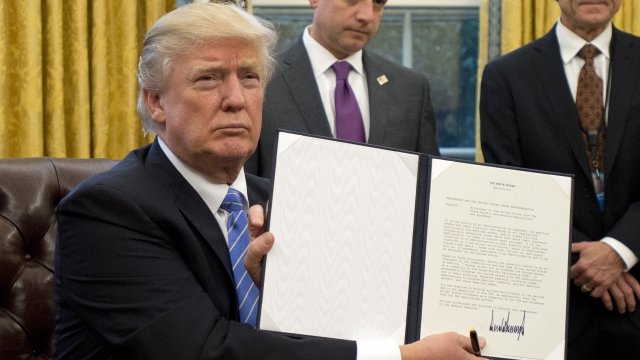 After the pullout from the Trans-Pacific Partnership, other countries began to fill the vacuum left by the United States.

Three days into office, President Trump made good on his campaign promise to pull the U.S. out of the Trans-Pacific Partnership.

It was inevitable. Being against the TPP became the only acceptable trade position in the election. And had Hillary Clinton won, the same move would have been made. But even with the U.S. backing away from the TPP, the other 11 countries have continued to move forward on that deal and dozens of others.

The TPP was unpopular with a lot of people, but those dealing with livestock were optimistic. The deal would have gotten rid of tariffs keeping U.S. farmers from exporting to countries like Japan and Vietnam. According to the U.S. International Trade Commission, the TPP would have provided for $10 billion in agricultural output over the next 15 years.

American farmers were banking on the TPP to increase the U.S.' market share and, in the end, put more money in their pockets. But the American-sized hole left in the deal is being filled by everyone else. For example, our neighbors to the north are estimated to gain an annual share of $412 million in beef sales by 2035 in Japan. That's more than enough to eclipse the U.S. in the area.

So, what has the administration done? Nothing of substance, yet. The president spent a lot of time railing on trade deals, promising better ones that give more to American workers. But there's been no specific plan put forth. The U.S. Trade Representative says the U.S. is hoping to work on bilateral trade deals with different countries. The big problem is most countries aren't fans of those; you get much more out of multilateral deals, like the TPP.

When we talk trade, people typically think of factories and not agriculture. And yet, the TPP seems to have been on track to help farmers rather than hurt them, so figuring out a way to get the U.S. back to the trade table is vital. Not doing so is politically risky because this is a huge part of Trump's base and a huge reason he won the election. According to exit polls, he received 62 percent of that vote.