Lake, Robson In Tight GOP Primary For Governor In Arizona 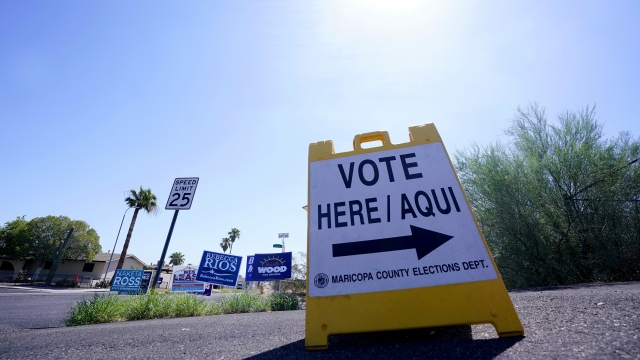 Former news anchor Kari Lake and development attorney Karrin Taylor Robson are separated by a slim margin in the contentious race for governor.

Arizona Republicans were deciding Tuesday between a well-known former news anchor and a development attorney in the race for governor of a crucial battleground state.

Former President Donald Trump backed Kari Lake, who walked away from her nearly three-decade career in television news and embraced his lies about the 2020 election. She faced Karrin Taylor Robson, who was backed by prominent Republicans around the country looking to push their party to move on from Trump.

The race was too early to call, with Lake and Robson separated by a slim margin.

Voters In 5 States Head To The Polls Tuesday

The 2022 primaries continue to be a loyalty test for former President Trump. As for the Democrats, it's the prospect of losing control of Congress.

As the midterm primary season enters its final stretch this month, the Arizona races are poised to provide important clues about the GOP’s direction. Victories by Trump-backed candidates could provide the former president with allies who hold sway over the administration of elections as he considers another bid for the White House in 2024. Defeats, however, might suggest openness in the party to a different path forward.

The former president endorsed and campaigned for a slate of contenders who support his falsehoods, including Lake, who says she would have refused to certify President Joe Biden's narrow Arizona victory. Robson said the GOP should focus on the future despite an election she called “unfair.”

In the race to oversee elections as Arizona secretary of state, Trump also backed a state lawmaker who was at the U.S. Capitol on Jan. 6 and claims the former president was cheated out of victory.

The election is playing out on one of the biggest midterm primary nights of the year — one that had some warning signs for Republicans.

The proposed amendment to the Kansas Constitution would have added language stating that it does not grant the right to abortion.

In Kansas, voters rejected a state constitutional amendment that would have allowed the Legislature to restrict or ban abortion. They were the first voters to weigh in on abortion rights since the U.S. Supreme Court revoked the constitutional right to terminate a pregnancy.

The rejection in a conservative state is a sign of potential energy for Democrats, who hope the anger at the court's abortion ruling will overcome inflation concerns and President Joe Biden's flagging popularity.

But the contests are especially salient in Arizona, a longtime Republican stronghold that has become more favorable to Democrats in recent years because of explosive growth in and around Phoenix. The primary and the fall election will provide insight into whether President Biden's success here in 2020 was a onetime event or the onset of a long-term shift away from the GOP.

Lake is well known in much of the state after anchoring the evening news in Phoenix for more than two decades. She ran as a fierce critic of the mainstream media, which she says is unfair to Republicans, and other enemies of Trump's Make America Great Again movement, including the late Sen. John McCain's family.

A vocal supporter of Trump's election lies, Lake said her campaign was “already detecting some stealing going on" in her own race, but she repeatedly refused to provide any evidence for the claim.

Robson, whose housing developer husband is one of the state's richest men, is mostly self-financing her campaign. The GOP establishment, growing increasingly comfortable creating distance from Trump, rallied around her over the past month with a series of endorsements from Ducey, former New Jersey Gov. Chris Christie and former Vice President Mike Pence.

The groundswell of establishment support for Robson drew national scrutiny to the race for what it says about the GOP base ahead of the crucial presidential primary in two years.

Robson is running a largely old-school Republican campaign focused on cutting taxes and regulations, securing the border and advancing school choice. She has also emphasized Lake's prior support for Democrats, including a $350 contribution to the last Democratic president.

On the Democratic side, Secretary of State Katie Hobbs defeated Marco Lopez, a former mayor of Nogales and border enforcement official during Obama’s administration.

As Arizona’s top elections official, Hobbs endeared herself to Democrats with an impassioned defense of the integrity of the 2020 election, a stance that has drawn death threats. However, she's been weighed down by a discrimination case won by a Black policy adviser from Hobbs’ time in the Legislature.

The Republican race for Arizona secretary of state was won by Mark Finchem, a Trump-backed candidate who was at the Capitol on Jan. 6, 2021. His competition included Shawnna Bolick, a state lawmaker who has pushed for legislation allowing the Legislature to overturn the will of the voters and decide which candidate gets the state's 11 electoral votes for president. The GOP establishment rallied around advertising executive Beau Lane, who says there were no widespread problems with the 2020 election.

Republican state House Speaker Rusty Bowers, who gave testimony to the House Jan. 6 committee about Trump's pressure campaign following the 2020 election, was defeated by a Trump-backed challenger in his bid to move up to the state Senate.