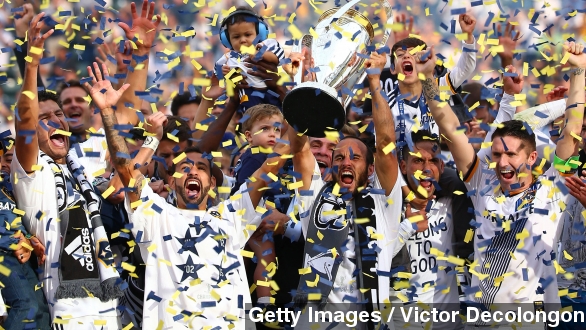 Landon Donovan exits the pitch on top of the game, as the LA Galaxy beat the New England Revolution Sunday to win a record fifth MLS Cup.

League MVP Robbie Keane provided the dramatics as he drilled one to the back of the net in the 111th minute of extra time to put the Galaxy up 2-1 on the Revolution, which became the deciding goal to secure LA's third title in the last four years.

LA's victory also captures another milestone for Donovan to add to his already impressive resume.

ESPN reported, "Donovan becoming the first player in MLS history to win six titles. He ends his career with the most goals and assists in league history."

Sunday's victory is also sweet redemption for Donovan, who made headlines when he was cut from the U.S. men's national team over the summer prior to the World Cup. (Video via EA Sports FIFA)

Now, ESPN's decision to put the MLS final head-to-head against the juggernaut of NFL afternoon games Sunday may come as a surprise, but the sports media giant says it was all very calculated.

ESPN's senior vice president of programming told Sporting News the MLS Cup went up against a lighter load of NFL afternoon games. It also tried to capitalize on viewership from millennials who may have watched the College Football Playoff selection show that could serve as a "strong lead-in" to soccer.

"Our proposition with MLS is a different proposition. It is resonating with a core fan group of 18-34 year olds. We’re not going to shy away from the windows where we think it makes the most sense."

Along with doing just about anything it can to snag viewership, some say this year's MLS Cup along with Donovan's retirement come at a pivotal time for American soccer.

How will it truly compete in an American sports market without rosters full of star power like the English Premier League has with the Ronaldo's and Rooney's of the soccer world? (Video via Nike)

Though, for its part, the league appears to be on the up and up. The Journal says the MLS recently inked an eight-year, $720 million TV deal with Fox, ESPN and Univision and in cities where U.S. soccer is popular, games regularly sell-out.