Large Crowds Expected Across The U.S. For 'March For Our Lives' 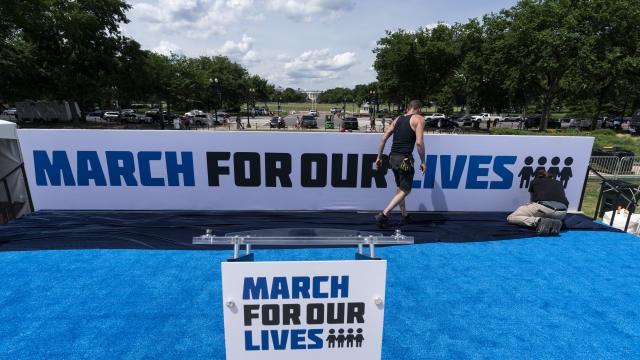 In the wake of even more mass shootings, specifically those in Buffalo and Uvalde, March For Our Lives is rallying again.

In the wake of mass shootings, for the second time March For Our Lives is hosting a day of action in Washington, D.C., with events in 450 cities across the world.

The youth-led movement started more than four years ago, after a gunman killed 17 student and staff at Marjory Stoneman Douglas High School in Parkland, FL.

In the immediate aftermath, through grief and shock, students at the school started to demand change. Viral videos, interviews and walkouts quickly grew into a nationwide movement with a rally in D.C. and marches across the country as youth pushed for gun legislation, called March For Our Lives.

But in the wake of yet more mass shootings, specifically those in Buffalo and Uvalde, March For Our Lives is rallying again.

"I feel very disappointed that we are not where we ought to be. We are still talking about the same issue we were talking about four years ago. Where's the legislation where how come shootings are not being reduced?" said Yolanda Renee King.

King is a youth human rights activist and the granddaughter of Rev. Martin Luther King Jr. and Coretta Scott King.

Like in 2018, Yolanda will speak to the thousands expected to attend the D.C. rally, a speech she said she hopes inspires and encourages perseverance.

King says the work is a marathon though, drawing encouragement from other youth activists and her grandfather.

"When my grandmother was trying to make the King holiday was trying to make my grandfather's birthday a holiday it actually took her 10 years to do so, so we've got to keep on staying with the issue, or trying to stay with the goal we're trying to accomplish to better the world," Yolanda said.

In the more than four years since the first rally, some point to impacts with voting turnout and in state laws but there are more reforms activists want to see, like universal background checks.

"I think our approach has changed. we recognize gun violence to be something that is so intersectional it's more than just mass shootings, it's the gang violence going on in black and brown communities and community based violence, it's suicide, it's mental health, it's domestic abuse, so March For Our Lives has definitely opened our horizons to recognize the intersectionality of gun violence," said Mariah Cooley, a board member of March For Our Lives.

In Parkland, a new generation is taking the lead. Zoe Weissman was in sixth grade at the time of the shooting. She's the director for March For Our Lives in Parkland.

"I think that this March is gonna provide a lot of people in Parkland, like myself, an opportunity to basically use their power and their experience as a part of the community of Parkland to tell people that this issue is so pervasive in our country," Weissman said. "And it's not just Uvalde, it's not just Buffalo and it's not just mass shootings, it's everyday violence that's killing thousands of Americans each year."

In the week leading up to the day of action, members of March For Our Lives have lobbied on the hill and encourage people to get involved.

Ahead of Saturday, activists, lawmakers, family members of gun violence victims rallied in front of the Capitol.

"I love these kids who keep fighting for their lives. I think we need to be clear on what the question is because the President already hears it and will sign it, the House hears it and they've already passed the legislation and half the Senate hears it and they're ready to pass legislation. So, the issue is not whether or not people are being heard the issue is why is a very small group of people in the senate holding the majority hostage?" said Fred Guttenberg.

His daughter, Jaime, was killed in Parkland.

"Jaime was a fierce fighter for what was right. Jaime would be here today if she wasn't in a cemetery," he said

In the years since Parkland, other families have also worked to push for school safety, mental health and firearms legislation reforms with lawmakers.

"We're saddened that it took another mass school shooting to start to bring people together. But we are encouraged that senators from both parties are actually discussing proactive things they could do and we're hopeful that this will result in some action," said Tony Montalto.

His daughter Gina Rose Montalto was killed in Parkland and he's the president of Stand With Parkland.

"Our children and their teachers deserve to be safe in school. We need Congress to act on that. We've seen both President Biden and President Trump advocate for red flag laws and yet Congress has failed to act. What will it take for congressional action? How many more lives must be lost in this process? I say not one more," said Montalto.

As youth call for change once more this weekend:

"We're saying enough is enough. So sometimes I do not feel as hopeful but I always conclude that we're going to win if you look at all the events historically the side who is fighting for good always has won," said King.