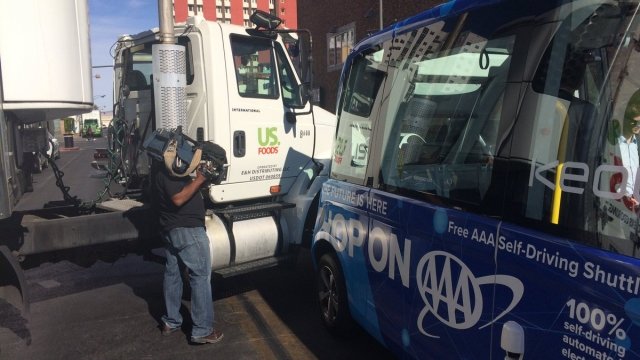 Not long after a self-driving shuttle bus was let loose in downtown Las Vegas, it was involved in a minor accident with a delivery truck.

A self-driving shuttle bus' big debut in downtown Las Vegas started off with a bang. Well, more like a crash.

Not long after the shuttle was let loose on the streets Wednesday, it was involved in a minor accident with a delivery truck.

"We were all like, 'Oh my gosh, he's going to hit us!' And there was no way to warn it; there's no horn," one passenger told KTNV.

To the shuttle's credit, the fender bender wasn't its fault. According to Newsy's partner KTNV, the truck was backing into an alley when it nicked the front of the shuttle.

The autonomous car company says its vehicles have been getting around without backup drivers behind the wheel.

The vice president of the company that helped create the shuttle said it sensed the truck was coming and stopped, just like it was supposed to. None of the eight passengers on board at the time were hurt.

Still, some say the accident shook their confidence in self-driving vehicles.

"How can you trust something that's controlled by a computer when computers ... I work in tech support, so I know how faulty this kind of stuff can be," a witness told KTNV.

This is far from the first collision involving an autonomous vehicle. Uber, Google and Tesla have all dealt with similar car accidents in the past couple of years.