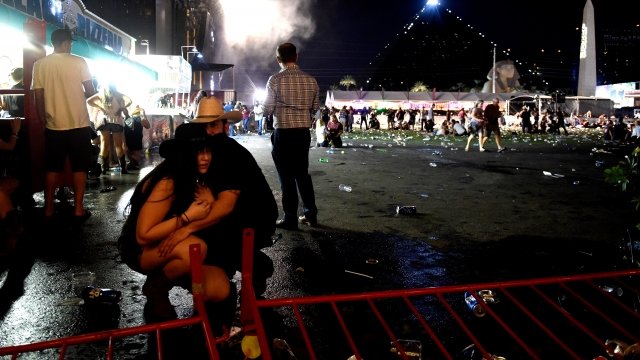 Officials say 12 of the firearms found in the gunman's Mandalay Bay hotel room were equipped with what's called a bump stock or a bump-fire stock.

Authorities have confirmed several of the Las Vegas shooter's weapons were outfitted with a device that increased their firing speed.

An official with the Bureau of Alcohol, Tobacco, Firearms and Explosives told reporters Tuesday 12 of the firearms found in the gunman's Mandalay Bay hotel room were equipped with what's called a bump stock or a bump-fire stock.

When attached to a weapon, the device replaces the shoulder rest and adds a small piece near the trigger. This allows the firearm to slide back and forth and harness the recoil power of every shot.

The shooter doesn't have to move the trigger finger to fire. Instead, the shooter pulls forward on the barrel of the gun. The weapon quickly "bumps" between the shooter's shoulder and finger, firing the weapon much faster than a human could.

The Victims Of The Las Vegas Shooting

At least 58 were killed in the Las Vegas mass shooting. These are the names and lives of those who died.

Bump stocks or bump-fire stocks allow a semi-automatic firearm to simulate a fully automatic weapon. But, because they don't mechanically alter the gun to fire automatically, they are legal under current federal law.

After listening to recordings taken during Sunday night's shooting, some experts suspected the gunman used a modified semi-automatic weapon, and it appears they were right.

Authorities say they are still working to determine which of the nearly two dozen firearms in his hotel room were used during the attack, which left 58 people dead and hundreds more injured.