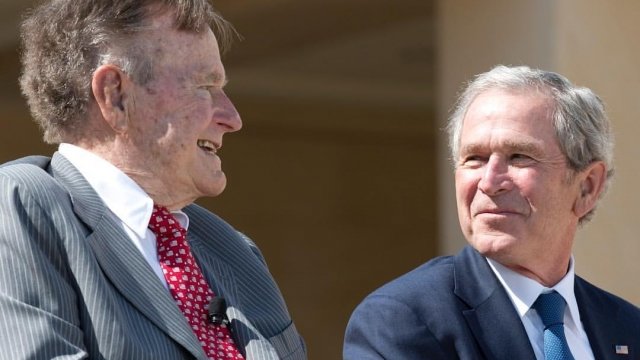 A new book highlights both Bush presidents — as well as their thoughts on President Donald Trump.

Before Donald Trump won the presidency, former President George W. Bush reportedly said in private: "I'm worried that I will be the last Republican president."

That statement inspired the title of an upcoming book about George H.W. Bush and George W. Bush. It also highlights ideological divisions within the Republican Party.

Both former presidents have candidly voiced concerns about Trump's leadership ability. Last year, neither voted for him — and that meant going against a party they both once led.

Mark Updegrove, the author of "The Last Republicans," told CNN: "It makes perfect sense. Donald Trump is everything that the Bush family is not."

George W. Bush Praises The Media As 'Indispensable To Democracy'

During an interview on the "Today" show, Bush said he supports the media because it holds the government accountable.

One of the key differences, according to the former presidents? Humility.

They told Updegrove they felt that trait was especially challenging, or even lacking, for Trump.

Just last month, George W. Bush delivered a speech that seemed to call out so-called Trumpism — and the bigotry, conspiracy theories and "casual cruelty" associated with it. At one point, Bush said: "We need to recall and recover our own identity."