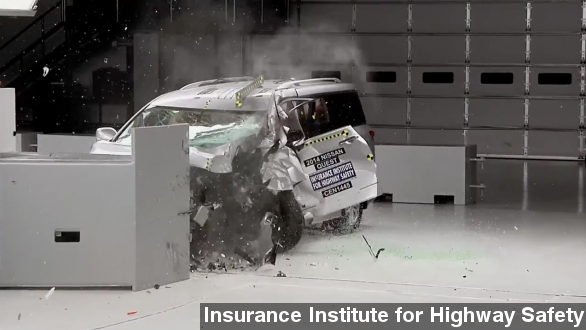 Five minivans were put to the test in head-on crash simulations by the Insurance Institute for Highway Safety.

The quintessential American family vehicle — the minivan — just underwent a series of crash safety tests. And, unfortunately, the results were not pretty.

This video from the Insurance Institute for Highway Safety, also known as IIHS, shows the front of several minivan models suffering significant damage when crashing head-on.

Five different minivans were put to what's called the "small overlap test," which simulates the front of a vehicle colliding with another vehicle or a tree or pole.

IIHS determined: "These crashes may be especially difficult for minivans to handle. That's because minivans are typically built on car platforms but are wider than cars. ... Minivans also are heavier than cars."

Of the five vehicles tested, only the Honda Odyssey performed up to the standards of IIHS. (Video via Oakville Honda)

The Toyota Sienna placed second. While the vehicle's air bags all deployed properly and provided enough coverage, IIHS stated the seat belt didn't hold the dummy in place during the crash. (Video via AutoGuide.com)

These rankings don't come as too big of a surprise, since the Odyssey and the Sienna are the two top-rated minivans, according to U.S. News & World Report.

But the other three vehicles — the Chrysler Town & Country, the Dodge Grand Caravan and the Nissan Quest — all received poor ratings, with the Quest being the worst.

"The structure collapsed like a house of cards. ... We had to cut the seat out in order to remove the dummy," IIHS Executive Vice President Dave Zuby said.

CBS reports Nissan said it would look into the results and find ways to improve its minivan, but the company says the vehicle fared well in other crash tests.

The Nissan Quest did receive a "good" rating — the highest rating — in the moderate overlap front test, as well as the side impact test and rear crash protection test.

The only U.S. minivan not tested was the Kia Sedona. That test should be coming in later months because the manufacturer is currently making adjustments to the vehicle to better protect it in these types of crashes. (Video via Kia Motors America)

This is the first time minivans have undergone this small overlap front crash tests. The IIHS began performing these tests back in 2012.