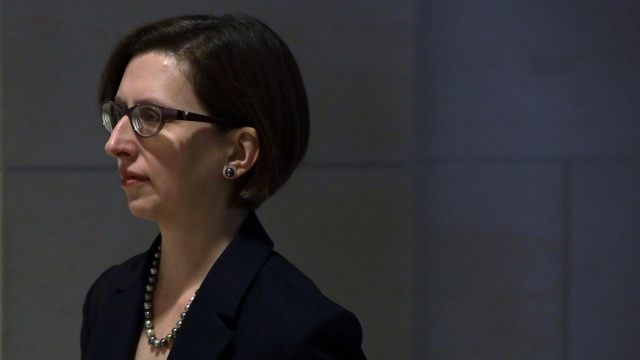 In her deposition, Cooper discussed the Defense Department's process for aid distribution to Ukraine and the notification that aid had been frozen.

Laura Cooper, a Deputy Assistant Secretary of Defense for Russia, Ukraine and Eurasia, is scheduled to testify on Wednesday as part of the ongoing House impeachment inquiry into President Donald Trump.

Cooper is responsible for overseeing U.S. military assistance to Ukraine. She's scheduled to appear despite the Defense Department telling Congress it would not comply with a House subpoena to provide documents related to the freezing of U.S. security aid to Ukraine.

Cooper’s decision to testify, which appears to be voluntary, follows the release of her closed-door deposition with the House in October. At the time, her deposition was delayed for several hours when House Republicans forced their way into the secure hearing room in protest of the Democrats’ handling of proceedings.

In her deposition, Cooper said her team coordinated a press release from the Pentagon on June 18 announcing the department’s plans to provide $250 million for training and equipment for the Ukrainian army. She explained that the aid was conditioned on the Ukrainian government fulfilling certain defense reform criteria and that Ukraine had met those expectations over the last three years.

Cooper said she first became aware that the release of military aid to Ukraine was being held up after a July 18 meeting on Ukraine policy. While she had not attended the meeting, she said she got a readout from it, in which there was discussion about the Office of Management and Budget withholding aid to Ukraine that was administered by the State Department’s Foreign Military Financing program.

Then on July 26, Cooper said she received word that the aid from the Defense Department was also being held up and that it related to President Trump’s “concerns about corruption.” According to Cooper, this led to concern among senior security officials who viewed the aid as “vital.”

She said, "My sense is that all of the senior leaders of the U.S. national security departments and agencies were all unified in their view that this assistance was essential, that we could work with the government of Ukraine to tackle corruption, and they were trying to find ways to engage the president on this."

In addition, Cooper’s deposition detailed an August conversation with former U.S. special envoy to Ukraine Kurt Volker. Cooper said Volker told her he was trying to get Ukraine to make a statement claiming no interference in the U.S. elections. According to Cooper, Volker said doing so would result in the aid to Ukraine being released.

Wednesday's impeachment hearings will also include testimony from Gordon Sondland and David Hale.