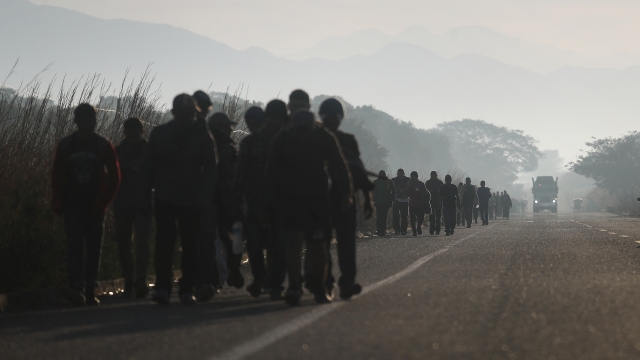 A new Trump administration rule that makes it harder for migrants to seek asylum at the U.S.-Mexico border is already facing challenges in court.

The so-called joint Interim Final Rule was announced Monday by the Department of Homeland Security and the Department of Justice. The agencies said it adds "a new bar to eligibility" for asylum-seekers who didn't apply for protections in at least one "third country" on their way to the U.S. border.

That means, for example, a migrant traveling north from El Salvador wouldn't be eligible for asylum in the U.S. if they didn't seek asylum in Guatemala or Mexico first. There are a few exceptions, like if a migrant applied for asylum in a third country but was ultimately denied.

But the ACLU and other organizations claim the rule breaks both domestic and international laws, and it shouldn't be allowed to stand.

The suit argues the Trump administration doesn't have the authority to turn away asylum-seekers who arrive at the southern border. U.S. immigration law says the government can't disqualify applicants based on how they entered the U.S.

The complaint also cites guidance from the United Nations High Commissioner for Refugees on the "safe third country" concept, noting that the "primary responsibility to provide protection rests with the State where asylum is sought."