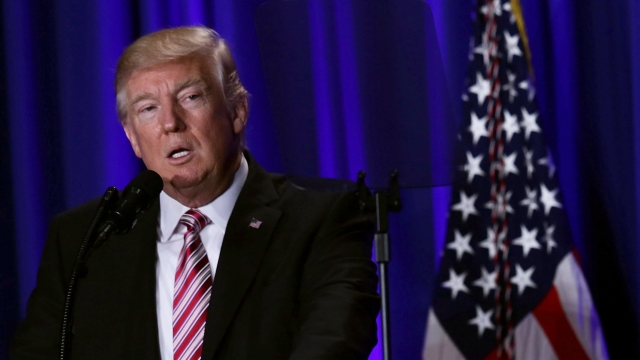 Lawyers argue the president is violating the First Amendment by blocking Twitter users.

President Donald Trump's use of Twitter is definitely controversial, but some lawyers are now taking it a step further: They're arguing it's unconstitutional.

The Knight First Amendment Institute is challenging the president's right to block people on Twitter.

A statement from the group argues that Trump's @realDonaldTrump account is a "designated public forum,"  and that blocking people from seeing the account is therefore unconstitutional.

Jameel Jaffer, the director of the Knight First Amendment Institute, said in a statement: "Though the architects of the Constitution surely didn't contemplate presidential Twitter accounts, they understood that the president must not be allowed to banish views from public discourse simply because he finds them objectionable."

The Twitter users represented in the letter to Trump include professional cyclist Joe Papp and March for Truth organizer Holly O'Reilly. The president blocked them after they responded negatively to his tweets, and, unsurprisingly, they're not alone.

Before Trump was sworn in as president, multiple other Twitter users said his account had blocked them. Some even took pride in the fact.

Whether Trump's Twitter feed counts as a place of public expression will be up to the courts. But the White House has claimed his Twitter feed is an official platform before.

This distinction could be important in the future, as courts are arguing how Trump's tweets should affect their rulings on his travel ban.

Correction: A previous version of this story incorrectly stated the group filed a lawsuit against the president. The group only sent a letter to the White House.