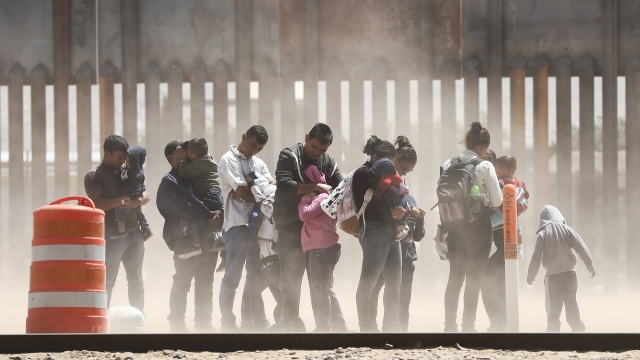 The White House has claimed the majority of migrants skip court to "vanish into the nation." But judges and lawyers told Newsy that's distorted.

"When we release the people they never come back to the judge anyway. They’re gone."

"The vast majority never show up for their hearing"

The Trump administration has long claimed that many immigrants take advantage of U.S. asylum laws, fail to appear to court, and then "vanish into the nation." The White House has used this argument to justify several policies restricting access to asylum and beefing up interior enforcement.

In June, DHS Acting Secretary Kevin McAleenan said that number was as high as 90%. McAleenan was actually referring to a select group of asylum seekers whose cases are being expedited through immigration courts. Vice President Mike Pence later repeated the 90% no-show claim and misleadingly applied it to all asylum seekers. Pence's press office was not available to comment.

"I don't know where the 90% is coming from, because that, to us, was quite foreign."

But the head of the immigration judges' union told Newsy that McAleenan's 90% figure is greatly exaggerated beyond what she and fellow judges witness in their courts. Ashley Tabaddor estimates the actual no-show rate for the accelerated cases, collectively known as the "rocket docket", is only around 33%.

The administration created the rocket docket last year in ten major immigration courts. The goal? To speed up the removal process of recently arrived families. According to the most recent government data, there are about 64,000 cases on the docket, of which 17,000 have been completed.

Of those completed cases, 80% resulted in "in absentia" deportation orders. That's what judges issue to migrants who fail to appear to court. But immigration experts told Newsy the 80% figure ignores the large number of pending cases where people actually did show up to their initial hearings.

Sarah Pierce of the Migration Policy Institute says the most accurate stat on how often immigrants actually skip court is the 14% in absentia rate for fiscal year 2013. That number comes from the Department of Justice's most recent yearbook. Why look at such old data? Pierce says older years are more likely to include slow-moving cases since the government only counts completed cases.

Now, why would analysts — like Sarah Pierce — have to work around official data to come up with accurate numbers? Tabbador says the government intentionally uses parameters that inflate the no-show rates in order to match the administration's rhetoric.

"The data that's being now produced as official data is not as reliable as it used to be because it's being manipulated. And the parameters that they're using, the way that they are compiling it, or the factors that they use to sort of create the data, one is not transparent. And two, it doesn't connect with the reality of what we are hearing from our judges and our experiences."

The Department of Justice, which oversees immigration courts, refused to comment for this story because of "pending litigation." The ACLU has filed a lawsuit against the government saying that "in absentia" deportation orders are not the result of immigrants intentionally skipping court. Instead, it argues, these rulings happen because the government's system to notify migrants of their hearings "is in chaos."

"Rarely a week goes by that we are not interacting with a client or potential client, who had been scheduled for a hearing in what we would deem to be a dummy date because they have a notice that says they have court, but in reality, when we contact the court, they say that this individual is not yet in deportation proceedings, that date is not accurate, they do not truly have court on the date listed."

Attorneys say bureaucratic errors that give immigrants the wrong dates for their court hearings has been a common problem for years. Immigration courts are overburdened and hearings are frequently rescheduled. That means DHS officials typically serve migrants court notices without times or locations, relying on immigration courts to mail the details later. But immigration lawyers say it's pretty common for their clients to never receive the notice.

"We have seen an increase in individuals who have been ordered removed in absentia, because they never received notice of their hearing."

Tabaddor says it's true that notices often fail to reach migrants' addresses but she says it's hard to know where the mistake originates.

"From the judges' perspective, we can't tell, "Is this because the person intentionally provided a wrong address? Was this a situation in which a government official inadvertently with, you know, 100 other cases that they were doing that day, maybe put a, you know, a wrong number in there? Or is it that they just didn't want to come? It's a mixed bag.

That being said, there is a free phone number that migrants can call at anytime to find out about the place and time of their hearings. But critics say information provided by the hotline is not always reliable and unrepresented migrants are likely confused by the complicated system.

"The dummy dates are now showing up on the 1-800 number. So you may call the 1-800 number, but that doesn't mean you actually have a hearing. And that's actually quite a common phenomenon."

The Supreme Court stated in 2018 that "given today's advanced software capabilities, it is hard to imagine why DHS and immigration courts could not work together to schedule hearings before sending notices to appear." But Tabaddor told Newsy that "because of the sheer volume of cases that the court is receiving, and the magnitude of the challenge of trying to deal with these," the government is "not yet at that sophisticated level."