Leaders And Law Enforcement At Odds Over COVID Vaccine 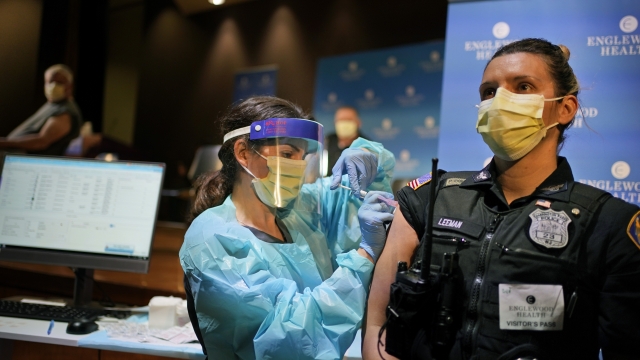 There's a looming crisis for the country's public safety arms as agency leaders plead with employees to simply get the shot.

Fights over COVID vaccine mandates are leaving police officers and firefighters around the country off the job.

In Chicago, more than a dozen officers are already stripped of police powers for refusing to report their vaccination status to the city. Up to a third of the city's 12,000 officers could be in violation of the requirement.

"This is really an upside-down world," said John Catanzara, president of the Chicago Fraternal Order of Police. "We should not be doing this to our members. And the ones that are partaking in this process will never recover their reputation."

Now, the fight is in the courts.

In New York, Mayor Bill de Blasio is requiring that police and firefighters be vaccinated by the end of next week.

"We are here to keep you safe, so you can keep everyone else safe," he said. "My goal is to end the COVID era once and for all. It can be done, but only if we keep pressing on."

The city says more than 70% of workers impacted by the requirement already have the shot. But the city is trying to entice the holdouts.

"We're now going to offer a particular incentive for the city employees who are not yet vaccinated: an additional $500 incentive," de Blasio said.

"What's really at stake here, what's really at risk is the safety of the community," said Don Jorgenson, president of the Tucson Police Officers Association.

Vaccination rates are high among first responders in Tucson, Arizona. But union leaders there say more than 100 could lose their jobs for failing to get the shot.

"One of our divisions has approximately 65 officers for the entire division," Jorgenson said. "So you're looking at eliminating almost an entire division of officers in the city."

There's a looming crisis for the country's public safety arms as agency leaders plead with employees to simply get the shot.