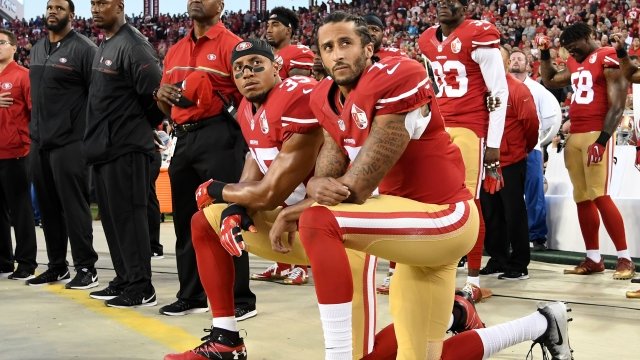 The NFL and many of its players responded to President Trump's criticism of national anthem protests and league safety initiatives.

President Donald Trump visited Alabama to stump for Sen. Luther Strange ahead of a special Senate election. But the comments that seemed to get the most attention were about football.

Trump chose the rally to take on the wave of protests against racial injustice from NFL players. We want to warn you his statement contains strong language.

"Wouldn't you love to see one of these NFL owners, when somebody disrespects our flag, to say 'get that son of a bitch off the field right now.' Out. He's fired," Trump said at the rally.

The NFL also condemned the comments, saying the president showed "an unfortunate lack of respect for the NFL" and a "failure to understand the overwhelming force for good our clubs and players represent in our communities."

Athletes who speak out on social issues are often told to "stick to sports" by fans who want to keep their entertainment and politics separate. But some said there's a double standard if the president won't stick to politics — especially when touching on player safety.

Later in the speech, Trump railed against some measures the NFL recently put in place to cut down on the number of head injuries.

"Today if you hit too hard, 15 yards throw him out of the game. … The referee gets on television. His wife is sitting at home. She's so proud of him. They're ruining the game," Trump said.

The NFL banned players from "forcibly hitting the defenseless player's head or neck area" in certain situations and outlawed unnecessary contact against players who are considered defenseless.

It's part of an effort to make the game safer since head trauma was linked to the degenerative brain disease chronic traumatic encephalopathy, or CTE.

NFL Players' Association Executive Director DeMaurice Smith said the union will continue "protecting the constitutional rights of our players as citizens as well as their safety as men who compete in a game that exposes them to great risks."