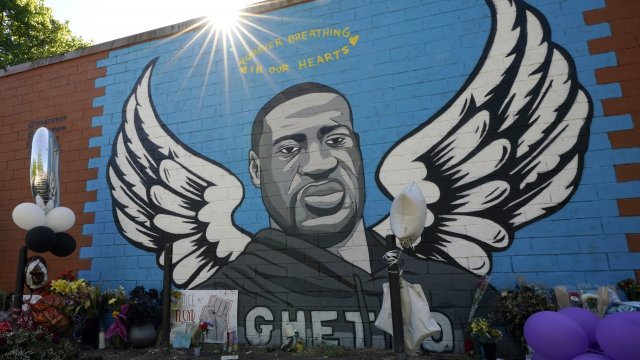 New bodycam footage, revealed by the Daily Mail, shows George Floyd telling officers "please don't shoot me" and "I can't breathe" well before he was pinned to the ground.

The video is incomplete, but it shows former Minneapolis police officers J. Alexander Keung and Thomas Lane handcuffing Floyd and struggling to try to get him into their police vehicle.

Lane pulls a gun on Floyd in the first few seconds of the confrontation, and Floyd repeatedly tells officers, "I'm not a bad guy."

The video is from Lane's body camera, and it stops just moments before Floyd is pinned to the ground.

The infamous video that set off outrage and sustained protests around the world picks up after this and shows former officer Derek Chauvin kneeling on Floyd's neck for nearly nine minutes.

The newly revealed body camera footage was submitted to a Hennepin County judge as evidence to drop the criminal charges against Lane because, in part, it shows Lane asking if Floyd should be turned over on his side.

The judge presiding over the case made the body cam footage available to some media during a very limited in-person viewing in July, but he has not released the footage to the general public.

A spokesperson for the Hennepin Co. District Court said in a statement to Newsy the court is working with the county sheriff's office to investigate how the Daily Mail obtained copies of the two body cam videos.

Ben Crump, who is representing Floyd's family, said in a statement, "The more video evidence you see, the more unjustifiable George Floyd's torture and death at the hands of police becomes. The police officers approached him with guns drawn, simply because he was a Black man. As this video shows, he never posed any threat."

Chauvin, who faces the most serious charge of second degree murder, is being held at Ramsey County jail in St. Paul. Lane, Keung, and former officer Tou Thao have all posted bail as they await their trial.