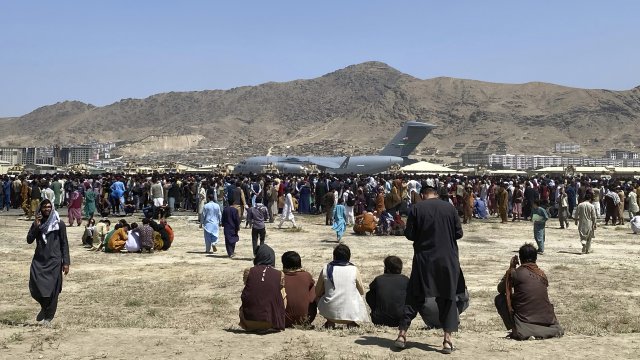 Some interpreters got emails from the U.S. notifying them they're approved to leave but they can't get close to the airport entrance.

President Biden is promising to get our allies out of Afghanistan. But the Taliban are controlling access to the airport in Kabul. The path to escape is seemingly impossible.

Some are so desperate for a future far from the Taliban, they're passing their children to the front of a fence at the airport complex.

The Taliban have been seen beating people on the streets and firing shots to disperse crowds, all while promising free passage for Afghans and Americans.

A lucky few have made it through roadblocks and an entry control point – including an interpreter who Newsy has been following months before the Taliban entered the capital Sunday.

Zak had started his special visa application in 2016, but couldn't show he had worked the 2-year minimum because his contracting company vanished. But he made it through. He's leaving with his wife and four young children.

Other interpreters are still waiting for word from U.S. diplomats, now working inside the Hamid Karzai International Airport, after fleeing the embassy – and reportedly shredding passports to destroy sensitive material before the Taliban arrived.

"There was nothing I or anyone else saw that indicated a collapse of this army and this government in 11 days," said Joint Chiefs of Staff chairman, General Mark Milley.

Some interpreters got emails from the U.S. notifying them they're approved to leave but they can't get close to the airport entrance. And others can't even make it through Taliban checkpoints to Kabul.

The same goes for Americans: A source involved in the evacuation effort tells Newsy an American who tried to leave Wednesday "never made it to the gate." His son got injured in the crowd and personnel were desperately re-working a strategy to help him.

An estimated 10,000 to 15,000 Americans remain in the country – a mix that includes spies, contractors, journalists, and NGO workers. Plus, more than 80,000 Afghans who would qualify for evacuation are effectively trapped.

Secretary of Defense Lloyd Austin said, "This is a war that I fought in and led. I know the country. I know the people. And I know those who fought alongside me. And as I said, we have a moral obligation to help those who helped us. And I feel the urgency deeply."