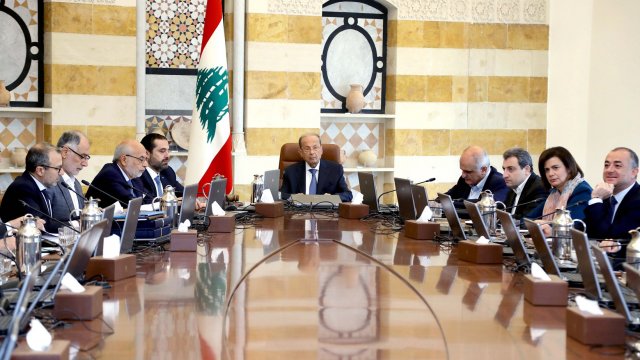 What started as a protest over a proposed tax evolved into a sweeping push for total reform.

Office of the Lebanese President

What started as a protest over a proposed tax...(nat pop) evolved into a sweeping push for total reform.

"There's 1 percent of this population ruling the 99 of us. They've stolen everything we've got."

Lebanon is in its fifth day of protest over dire economic issues.

The country is $86 billion in debt, according to its finance ministry.

Lebanese citizens have shouldered a series of tax hikes.

But a government-proposed tax on Whatsapp phone calls and other messaging platforms pushed tens of thousands of protesters into streets across Lebanon.

"Enough is enough. This is the first time I come down here to the streets because enough is enough. I don't want to leave, I want to stay here. I want a future for my kids here. And this is why we're here today."

The government quickly scrapped the proposed Whatsapp tax, and Lebanon's finance minister said the government will not implement new taxes.

But demonstrations evolved into a push for complete political overhaul.

Protesters called for 30 members of Lebanon's cabinet to resign.

They want them replaced with technocrats, rather than members of party factions.

Four ministers have since resigned.

The country's cabinet is meeting at the presidential palace to discuss a series of economic reforms put forth by Lebanon's prime minister. One reform includes cutting ministers' salaries in half.

Lebanon's president also sat down with a small group of protesters.

But there isn't much faith in the current government to find a solution.

"We want a new election, a new parliament. We want these thieves out."

Leaving steadfast protesters in the streets.