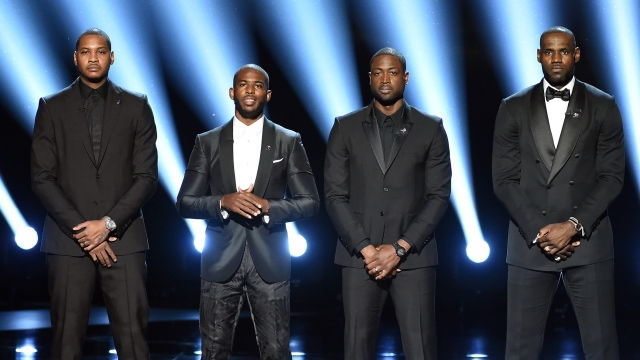 NBA players LeBron James, Carmelo Anthony, Chris Paul and Dwyane Wade were the first on stage at the 2016 ESPY Awards.

"Let's use this moment as a call to action to all professional athletes to educate ourselves, explore these issues, speak up, use our influence and renounce all violence," LeBron James said.

NBA players LeBron James, Carmelo Anthony, Chris Paul and Dwyane Wade took the stage early in the show to encourage athletes to get educated about social activism and to call for an end to violence around the country.

The message comes after fatal police shootings of black men in Minnesota and Louisiana as well as mass shootings in Orlando and Dallas.

During their speech, the athletes used the activism of the late Muhammad Ali as an example.

Ali was outspoken about his opinions on social issues and publicly fought against being deployed for the Vietnam War. Ali died in June at the age of 74.

James also has spoken out on political issues before, including officer-involved deaths of black men.

In 2014, James and his teammates wore "I Can't Breath" warmup shirts before a game in honor of Eric Garner, the black man who suffocated and died after a New York City police officer put him in a chokehold.

This video includes a clip from CBS and images from Getty Images.