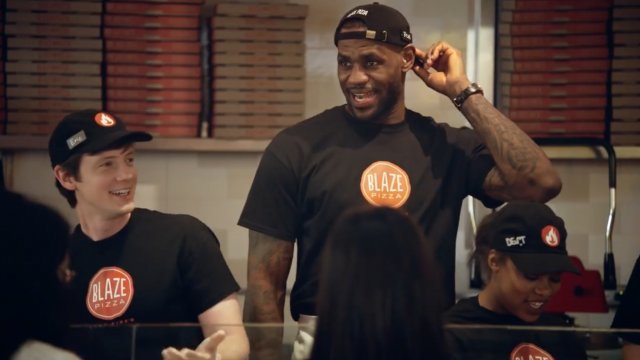 Blaze Pizza started with two locations in California. It now has 200 around the U.S. and is on track to make $285 million in sales.

Along with going to NBA Finals seven years in a row and being (arguably) the best basketball player on the planet, LeBron James has other responsibilities.

"I mean, I love spicy sauce, but you might not be a spicy guy," LeBron James says in Blaze Pizza commercial.

One is his stake in Blaze Pizza, a 5-year-old company that was just named the "fastest-growing restaurant chain ever."

Blaze Pizza started with two locations in California. It now has 200 different joints around the country and is on track to make $285 million in sales this year.

James was one of the original investors in the fast-casual pizza chain and owns 17 franchises in places like Chicago and South Florida.

And while James seemingly endorses everything, he had to walk away from a well-paying contract with a well-known company to continue with Blaze Pizza.

Will These New $495 Basketball Shoes Be A Slam Dunk Or A Flop?

"You had a great contract with McDonald's — you had another $14 [million] or $15 million dollars guaranteed," said Maverick Carter, James' business partner.

"Forget the money," James said. "We can actually build something, and if it doesn't become successful, then we can only blame ourselves."

In response to the good news, James tweeted, "I mean who doesn't like pizza?"

And you know the only thing people like more than pizza? Dough.