LeBron James Ran Over Jason Day's Wife During A Game 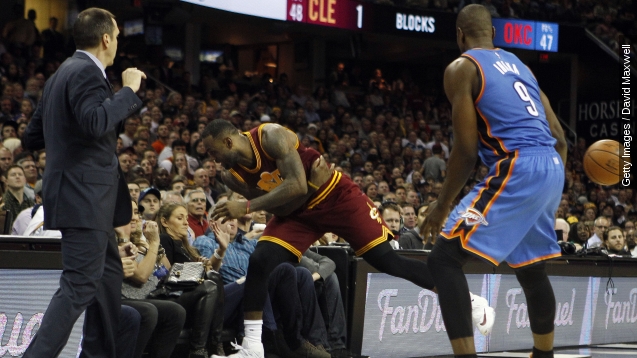 Pro golfer Jason Day took in a Cavaliers game with his wife Thursday night, but it got a little too real when she was knocked off her chair by LeBron.

The second-ranked golfer in the world, Jason Day, has been known to come to a Cleveland Cavaliers game from time to time.

Little did the reigning PGA champion know Thursday night's game would be coming to him — or more accurately, to his wife.

In the fourth quarter of Cleveland's narrow win over Oklahoma City, LeBron James dove for a loose ball and plowed into Ellie Day, knocking her clean out of her courtside seat. She was carried out of the arena on a stretcher.

James apologized for the incident but said the play was a part of the game.

"Going for a loose ball, [I'm] just trying to keep a possession going, and I hate that that was the end result of it," James said after the game.

Cavs coach David Blatt sent his well-wishes along, too while also questioning fans' ability to sit so close to the action. (Video via Cleveland.com)

"It's always concerned me, the sideline seats," Blatt said after the game, "because things like that, when you’re talking about players of this speed and effort level, it’s not a simple thing."

But LeBron doesn’t see it that way.

James said he heard Ellie Day was "doing great," and she was reportedly alert and responsive when being taken off the court. For Jason, that’s probably a relief.