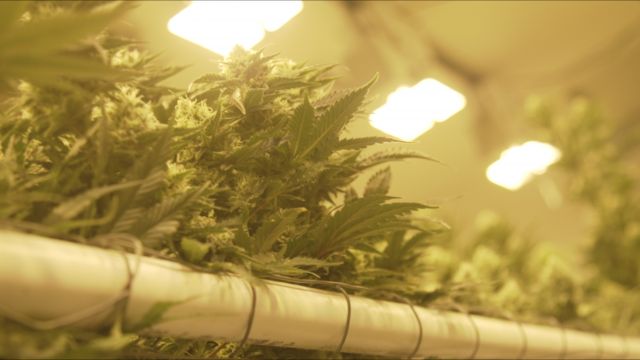 Most banks are still wary of working with the legal side of the booming industry.

A handful of states are considering making recreational marijuana legal, and the businesses already doing that in Colorado could be examples for others. Because it's still illegal at the federal level, they face different barriers than your average small business.

From the very beginning of the growing process, Colorado cannabis plants are highly regulated. Tim Cullen is CEO of Colorado Harvest Company, and he showed us around his facility.

Cullen said: "As you look at these plants here in front of us, you see that there are different colored tags. On these plants there are blue tags that are recreational plants and there are yellow tags that are medical. ... They're radio-frequency tags. They have bar codes and tracking information on them, and they're registered to this company. And so every plant has a tag on it, and it's these bar codes that are updated for anything that's watered in or sprayed onto these plants."

The tags are part of a state tracking system called Metrc. Since 2013, Colorado has used this system to track millions of plants to ensure cannabis companies follow the law.

Back at Cullen's dispensary, consumers have to pay in cash. In fact, the entire industry deals primarily in cash, which is harder to track.

"Consumers are not allowed to use their debit cards or credit cards to purchase marijuana," Cullen said.

The system exists because banks are wary of working with an industry that's still technically illegal at the federal level.

"Until about 18 months ago, it was really iffy as to whether or not you could have a bank account," Cullen said. "We had 14 accounts shut down in a couple year period and at one point ended up with no bank account at all. It might sound like a fun reality show to have lots and lots and lots of cash around, but in reality, it's not fun at all. It means that we're hiring armed guards, we're keeping money in safes, and we're paying people with guns to sit there and watch it. We want banking."

Now, small banks in Colorado are starting to work with the cannabis industry, but that doesn't solve every problem.

Lamine Zarrad is a former bank regulator and now the CEO of Tokken, a startup that's hoping to give cannabis companies a way to track their transactions as closely as they track their plants, by recording those transactions using blockchain technology.

"If you are going to keep these individuals out of banking, they're forced to operate in cash and if they're forced to operate in cash they're a lot more high risk," Zarrad said. "So now you have these businesses that operate predominantly in cash. It's very difficult to reconcile every penny of every transaction and for a financial institution to know their client, know their customer well enough to have 100 percent certainty that every single penny came from a lawful transaction. Cannabis, in my opinion, could do one of two things. It could either harm a bank as an industry, it could harm banking because they don't know how to deal with it and it forces law abiding citizens to work in a quasi-illegal state. Or they can embrace it and try to analyze the risk and try and understand these novelties that are bought by this new industry."

But Zarrad says that won't solve everything.

"Prohibition on alcohol ended 82 years ago, and liquor stores are still considered high risk by most financial institutions," Zarrad said. "Cannabis has another 100 years or so before that stigma wears off and banks are going to freely open their arms and accept those dispensaries and growers and extractors as relationships."