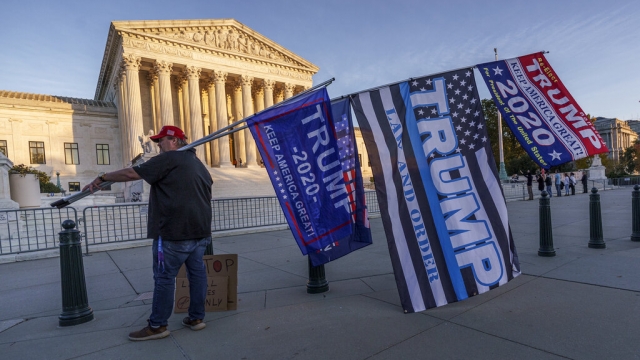 The Trump campaign has filed an onslaught of legal challenges in an attempt to overturn the results of the election. But will they succeed?

The Trump campaign has filed an onslaught of legal challenges in an attempt to overturn the results of the election. But will they succeed?

Before the election was called, President Trump made it clear.

“We will be going to the US Supreme Court,” said President Trump during a recent press conference.

So far, most of the campaign’s lawsuits have been legal deadends.

“These are what lawyers would call nuisance suits or frivolous lawsuits, I think that they're being filed largely to cast doubt on the integrity of the process,” explained Myrna Pérez, Director of The Brennan Center’s Voting Rights and Elections Program.

The only case to have gotten the Justices’ attention post-election is in Pennsylvania, where the GOP contested a number of things, including the Pennsylvania Supreme Courts’ decision to grant a 3-day extension to accept mail-in ballots postmarked by November 3.

Associate Justice Samuel Alito made waves over the weekend when he issued an order saying votes received after 8 pm on election day must be segregated from all other ballots and counted separately. Something the Pennsylvania secretary of state had already ordered -- but Republicans wanted to be sure.

Experts say even if that case gets to the Supreme court, the number of ballots segregated in Pennsylvania may not be enough to flip the state, let alone the election.

Some legal analysts have suggested that the Constitution only allows legislatures to determine voting laws and that the Trump team may have an inroad to the High Court there since many election rules this year were put in place by entities such as election boards or state supreme courts. Four of the court’s conservative justices seemed to leave room for that argument earlier this year. But legal experts say the argument is questionable.

“There's a real fetishizing of the words "the legislature" in the Constitution because of course, legislators, as we all learn in grade school, make rules. But then executive officials and states need to interpret and implement those rules in particular circumstances. And courts sometimes need to sort out disputes over those interpretations and implementation,” explained Joshua Geltzer a Professor at Georgetown Law.

“The courts have always had an equitable function, which means that courts have had to be able to interpret law and do the right thing under what the law was  because there's going to be gaps in legislation,” explained Pérez.