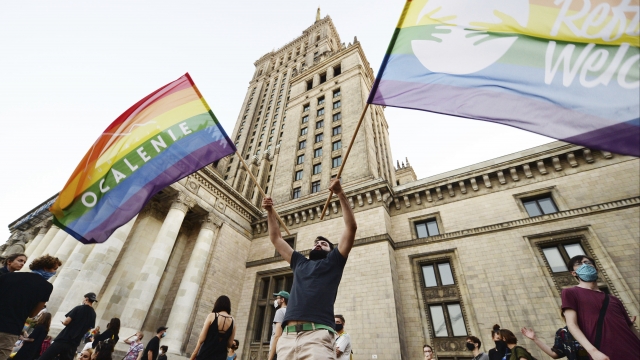 LGBTQ rights advocates took to the streets of Warsaw and other Polish cities this weekend in the latest sign of tension under an increasingly homophobic government.

On Saturday the crowd chanted "you will not lock us up" as they protested the Friday arrests of 48 demonstrators. A protest group said authorities pushed marchers to the ground and held boots to their necks.

The protests were sparked by the arrest earlier this year of transgender activist Malgorzata Szutowicz, commonly known as Margot. She was arrested for civil disobedience after cutting the tires of a van spewing anti-LGBTQ rhetoric.

Police have held Szutowicz in pre-trial detention for two months, claiming she also physically accosted the van's driver. Szutowicz's lawyer said her legal team has had no contact with her since her arrest.

The protests come as homophobia is rising in the conservative-led Poland. The recently elected president won a second term campaigning on anti-LGBTQ messaging and state television broadcasts warnings about what's called "the rainbow plague." That hateful message is amplified by some Catholic church leaders in Poland, which has been described as the most homophobic country in the EU.

non-governmental groups will have to declare any foreign funding sources.