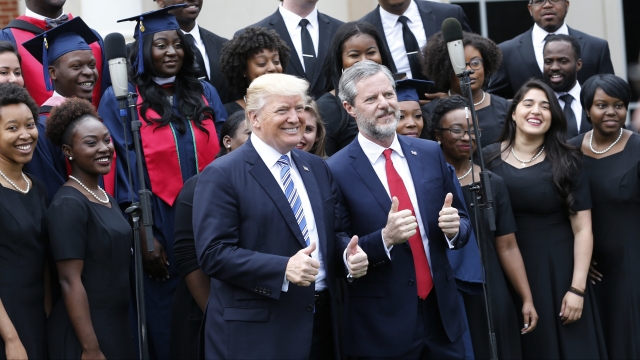 It comes after he posted a photo posing next to a woman with his pants unzipped.

Jerry Falwell Jr., the president and chancellor of the evangelical Liberty University in Virginia, has agreed to an "indefinite leave of absence."

The board of trustees made the announcement Friday. It didn't provide a reason for the decision, but it comes after Falwell posted a photo on Instagram of himself posing next to a woman who isn't his wife, while his pants were unzipped. The photo has since been deleted.

Falwell told a local radio station it was "in good fun." He said his pants were unzipped because he was imitating the woman next to him, who was pregnant and couldn't button her shorts.

Falwell, a vocal supporter of President Donald Trump, has drawn controversy before. In 2017, he publicly backed the president's comments that both sides were to blame after KKK and neo-Nazis clashed with counter-protesters in Charlottesville, Virginia. A group of alumni afterward said they planned to "return their diplomas" in protest of Falwell. And in May of this year, the Liberty president tweeted blackface and KKK imagery. That led to the resignations of at least four Black university employees.