Library On Wheels Brings Books To Kids In War-torn Syria 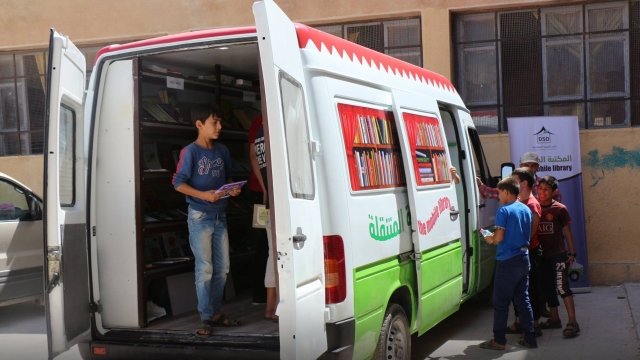 The project wants to keep children reading even while they're displaced due to the ongoing civil war.

This is a library. In a van. In northern Syria. It's called the Mobile Library, and the goal is to promote reading and education for kids who don't have access to a public library.

The Mobile Library has traveled to different cities in Syria's northern Idlib province. Children pick out books to read and are encouraged to share what they learned with others.

Dari Sustainable Development runs it. The group had roots in the Damascus suburb of Daraya before the government displaced the city's population in 2016.

"We feel this is really benefiting them. It's helping them shape their personality, so I believe it's a main part of the visit or the project as a whole," said Muhammad Shihadeh.

'Tell The World We Want Freedom': The End Of The Daraya Siege

The siege of Daraya began shortly after residents blamed the Syrian regime for the deaths of hundreds of civilians.

Newsy spoke with Shihadeh, a member of Dari who works with the Mobile Library.

"When we started Dari, one of the main goals in our minds was to empower society and to empower the vulnerable people, especially children and women," he said. "We understand that reading is quite important, but in addition to reading, we need to build confidence in these children."

Now in Idlib, the group has tried to improve lives in an area largely controlled by hardline extremist groups.

"Usually we call in for the visit before the visit itself so we can check if the people of the area we are going to are happy with the project, if they are cooperative or not. In most cases, they were cooperative and they were happy to receive such visits. In a few cases, officials were reluctant about the content of the books," Shihadeh said.

The Mobile Library is part of their effort. Shihadeh says the library has about 2,000 books. With those, the group says it hopes to keep children reading — even while they're displaced.