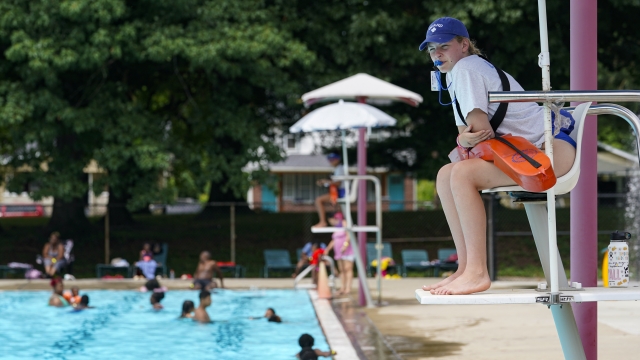 For the first time in its 19 year-history, Pirate's Cove in Colorado is shutting down on Mondays because it can't hire enough lifeguards.

At jam-packed neighborhood pools around the country, sometimes the difference between sinking or swimming is a watchful lifeguard.

But this summer there's a nationwide lifeguard labor shortage.

Brad Anderson is the aquatics manager in Englewood, Colorado.

NEWSY'S CLAYTON SANDELL: How many people come here in the summer?

The city-run Pirate's Cove waterpark needs up to 60 lifeguards each day to keep the rivers lazy and the slides sliding.

"We need to have that vigilance of a lifeguard that is trained who can sit there and prevent drownings," Anderson said.

But for the first time in its 19 year-history, Pirate's Cove is shutting down on Mondays because they can't hire enough lifeguards.  The ones they do have don't always want to work full time.

It's like that from Tampa to Green Bay, San Diego to Salt Lake. The American Lifeguard Association says the shortage is impacting roughly a third of the nation's 300,000 public pools.

There are so many swimmers and so few lifeguards that the state of Colorado is now offering $1,000 to anyone who wants to add "lifeguard" to their resume.

In Aurora, Colorado, Derrick Tripp, the aquatics superintendent, hopes that incentive will help him beef up staff at the city's 10 public pools. They hired 200 lifeguards this summer. They need 300.

"There's a lot of cities and pools that have had to stay shut down through the summer. Fortunately we have all of our pools open right now. At limited capacity, but they're all open," Tripp said.

This Aurora pool opened in the 1960s. Amanda Hernandez comes here with her three kids and her goddaughter.

"Swimming. If they could do it every day, they'd love to do it," Hernandez said.

When pools have to lock their gates, it often hits poor communities the hardest.

SANDELL: What if this place closed down?

AMANDA HERNANDEZ: It would be sad. For me, we would just go somewhere else.  But for families who don't have cars or who don't drive, I would think that would impact them a lot.

And as officials warn about sweltering heat and the potential for a summer of violence, public pools offer a critical retreat — a place to literally cool off.

"A pool is a place where you feel safe and you come and you bond, and traditionally it is a very happy place to be and a comfortable and safe space for kids.  And we try to keep it that way," Tripp said.

"We're doing the best we can.  We've done radio ads, we've done social media, we've done a lot of different things that we've never done in the past to get the people to get here," Anderson said.

A job working outdoors earning around $16 an hour, and potentially saving lives.