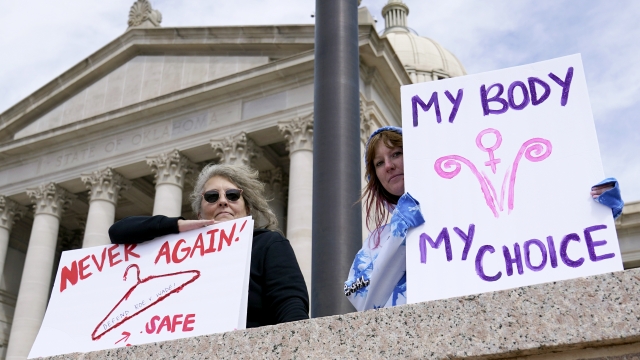 Cecilia Otero an Oklahoma resident, is asking herself a lot of questions these days.

"Plan B, do I need to go and buy like, you know, a few to have on hand just in case? There's also the Plan C pill, and I'm just like, living in Oklahoma. I'm just like, well, how do I access that? And I don't know, like, my options feel very dwindled," Otero said.

At just shy of 32, she's made the call that she doesn’t want to have children. But in her home state of Oklahoma, she knows that should she get pregnant — she'd have some tough decisions to make.

"I feel like I don't have that right to choose anymore," Otero said.

And — she really doesn’t. Just about two months ago, Republican Governor Kevin Stitt signed a total abortion ban into law, enforced by civil lawsuits similar to the 2021 law upheld in Texas. It was just the latest in a string of anti-abortion bills in the state, but it’s the one that took care to a screeching halt.

"Because of the fear of being sued with a $10,000 balance sheet, providers took the necessary steps in Oklahoma and stopped care on the Friday when it went into effect," Cox-Toure said.

Abortion care facilities have been sitting vacant for more than a month — and even abortion care funds have been put on pause while lawyers figure out the legalities of the Supreme Court’s decision to overturn Roe.

"We have no idea what assist means. So people who may donate to our abortion fund, could they be in violation of these laws? People who help someone go to a state where abortion is legal, are they now in violation?" Cox-Toure said.

Oklahoma’s Attorney General John O’Connor on Friday that he believes the law is clear.

"I would say if you put up a billboard or if you advertise that that you're going to provide abortions in Oklahoma or in another state, that you're soliciting an abortion. So law enforcement is now activated with respect to any efforts to aid, abet or solicit abortions," O’Connor said.

There are currently a handful of challenges in front of the state supreme court — dating back to 2017. But for now their eyes are on Kansas — the only nearby state that permits abortion. But voters will weigh in there on a ballot initiative in August that could end that safe haven.

"We would be very much the, you know, abortion access desert because of where we are," Cox-Toure said.

Should it be successful — there may be an effort for a ballot initiative here, too. After all — a recent poll showed more than half of Oklahomans did not want to see a total ban.