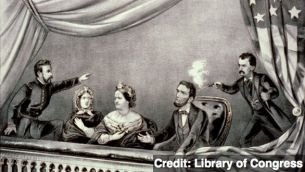 A new book called "The Lincoln Deception" suggests there's more to the story of Abraham Lincoln's assassination in 1865.

So we’re absolutely willing to acknowledge there’s at least a part of this aimed at selling books. But we can’t resist.

A new book called “The Lincoln Deception” suggests there’s more to the story of Abraham Lincoln’s assassination in 1865. (Image via Library of Congress)

Specially — surrounding how assassin John Wilkes Booth, the actor and Confederate sympathizer who murdered the nation’s 16th president did what he did.

Booth was, of course, shot by a Union soldier almost two weeks after the assassination, but eight other conspirators were convicted. Four were hanged.

Politico’s Patrick Gavin talked to author David Stewart, who isn’t giving us much in the way of details about his theory, saying only: “...the standard view that John Wilkes Booth was the semi-deranged actor who thought it all up is silly.”

Yes, we’ll admit, that’s really not much to go off of, but it centers around this guy:

Representative John Bingham, who was a Republican congressman from Ohio. (Image via U.S. Congress)

He served as a judge advocate in the Lincoln assassination trial with these two other guys: Joseph Holt and Henry Burnett.

Author David Stewart says Bingham took a secret to his grave, having to do with there being still others behind what Booth did.

But this book IS fiction. Stewart says he took the real-life nugget of the secret Bingham took to his death, and wove it into a fictional story. (Book cover via Kensington Publishing)

But he acknowledges we’ll likely never know the whole story of Lincoln’s assassination. Still, it never ceases to intrigue.