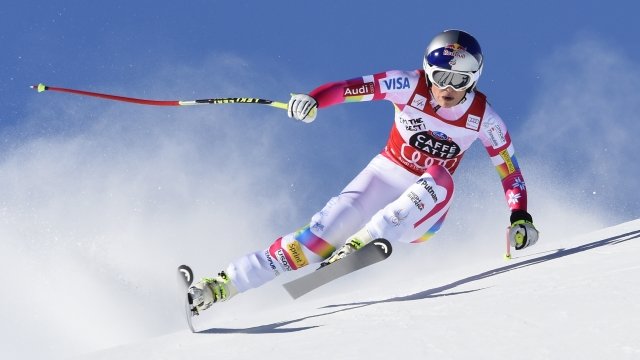 The U.S. Ski and Snowboard Association is expected to propose she race in a men's World Cup event at Lake Louise in Canada.

Lindsey Vonn is one of the most decorated female skiers on the planet. She's nabbed over 100 wins and over 190 podium appearances over her career. Still, one goal has consistently eluded her — competing against men in a world competition.

But Vonn might get her best chance this November. The U.S. Ski and Snowboard Association is expected to propose she race in a men's World Cup event at Lake Louise in Canada.

Even outside the skiing community, Vonn is a well-known name. And her racing against men could be pretty marketable.

But the USSA has to convince the International Ski Federation — known as the FIS. And the organization has denied Vonn's request before.

John McEnroe thinks Serena Williams is the "greatest female player ever" but would rank about "700 in the world" on the men's circuit.

Earlier this year, one high-ranking FIS official said, "If the ladies are allowed to race with the men, then also the men need to be authorized to ski with the ladies. And I'm not sure this is a direction we want to go."

Yet, the FIS itself says it's divided on the Vonn issue, which seems to mean she has some support within its ranks.

So, if given the chance, could Vonn actually compete with the men?

American skier Travis Ganong told ESPN no, saying her times don't stand up to most men's.

USA Today noted at Lake Louise in 2015, Vonn's winning time on the women's side was three seconds slower than the winning men's time — which is a pretty huge difference in the sport of downhill skiing. Vonn's time was better than 11 men who finished their race, but Vonn, as a woman, also raced on a shorter course.

Ganong said a race between Vonn and male skiers could bring good publicity to the sport, but he suggested she race the men in an exhibition event.