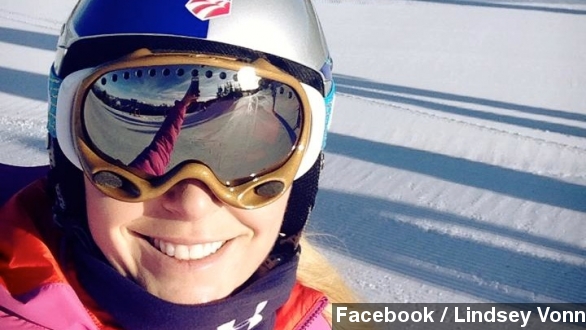 ​Winter Olympic hopeful Lindsey Vonn spent Thanksgiving at her home away from home: the ski slopes.

The downhill champion posted photos atop a ski hill in Vail, Colo., Thursday. Though it's not surprising to see Vonn with a pair of skis on, her photos come after sustaining another knee injury only nine days prior. (Via Instagram / lindseyvonn, Wikimedia Commons / Gerwig Loffelholz)

An all-smiles Vonn posted to Facebook saying, "First day back on snow since my crash and it was awesome!" (Via Facebook / Lindsey Vonn)

On Wednesday, Vonn asserted the same confidence on the "Today" show. Matt Lauer asked the looming question, "Will she be ready for the Sochi Winter Games coming up in February?"

VONN: "It was one of those fluke-y things that sometimes happens. Unfortunately, it was really bad timing for me, but I'm still confident. I still feel like I have a lot left to achieve this season. I just have to kind of take it day by day right now, but I still have time before Sochi." (Via NBC)

The bump nine days ago was only minor compared to her nasty spill last February at the Super-G World Championships. The crash resulted in two torn ligaments in Vonn's right knee and a broken bone in her lower leg. (Via ORF Eins)

Since, The Boston Globe reports Vonn has been in rehab and making progress "ahead of schedule."

During her recovery period, she continued to show support for Team USA. Back in October, she was spotted in Times Square with Sochi on her mind as she posed for a meet-and-greet session hyping the games. (Via TeamUSA.org)

Because of this most recent injury, Vonn will be out for the Beaver Creek race she was scheduled to compete in this weekend. Another missed race means she has yet to compete at any World Cup races this year. However, CNN reports Vonn's next opportunity "is likely to be at the Canadian resort Lake Louise next weekend." (Via CNN)

If she remains healthy, Vonn will be defending her gold medal in women's downhill alpine skiing at the 2014 Winter Olympic Games.