Volunteers Are Still Rescuing Livestock And Pets From Flooded Midwest 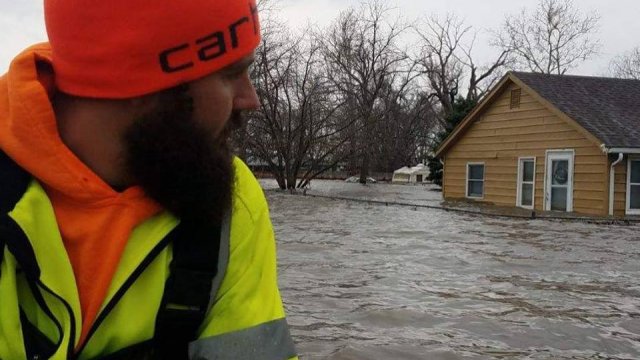 Weeks after March floods hit the Midwest hard, some groups are still working to save stranded animals.

It's hard to count the number of livestock and pets lost in the March floods through the Midwest, but even in the weeks past, some rescue groups are still going into flooded communities to try to help take care of the animals.

Newsy spent two days with a small rescue called Muddy Paws Second Chance. Before the floods, the group helped with veterinary bills or fostered dogs or cats in their homes. But since the water rose, they estimate they’ve saved more than 200 farm animals and pets from drowning, starving, or getting lost in the elements.

"I can't imagine being these people that couldn't – you know some of them were at work they couldn't get home. I just wanted to, we all just wanted to help everybody that we could get their animals to them," Kerri Ferguson, a volunteer and former vet tech said.

"The last couple of weeks we have had to figure out exactly where to put chickens. Where to put goats. Where to put a pot bellied pig. So it has been very interesting," said Terri Larson, Founder of Muddy Paws Rescue.

The Mills county sheriff allowed the rescue to boat into evacuated areas that are still closed to the people who live there. Each day, volunteers load food and kennels onto the boat, set small traps they use to safely capture loose animals, and look up-trying to see if there’s an animal on a roof or in a tree – signs of life. Mike MacEachern lent his boat. He says the days can be very long.

"It's been so busy I haven't had time to think about it. A lot of days are just not even eating, don't have time," he said.

The weather makes it even harder for those out here trying to help the animals. It is rainy. It's been very windy. It is cold. They say, in the 20 days they've been working, so far, they've only had three days of pleasant, sunny conditions.

In The Midwest, Flooded Farms And Farmers Face An Uncertain Season

Flooded farms in Nebraska and elsewhere in the midwest will have to dry out before they're ready to grow the season's crops.

And then you have your setbacks… the pets they rescue don't belong to the owners who come looking for them, or a cat so high up, no one can get to it. And sometimes, the group can't save every animal.

"We went to a farm, that you could you know, you can look at the house and tell how high the water had gone and it had easily been probably 12 feet. We walked into a barn just to see if we could find anything. And I looked in the first stall and there was a horse barn,"Ferguson said, beginning to tear up. "I'm sorry, I'm going to cry talking about it, and left tied up in his stall so he couldn't you couldn't get out. And so that by far was the hardest thing for me was to see that horse."

But there are still animals out there who need the help -- so the volunteers refuse to quit. The day Muddy Paws took Newsy out they were able to rescue one cat, but not another. They planned to go back the following day, and try again.

The money would help cover rebuilding costs for air bases in Nebraska and Florida.