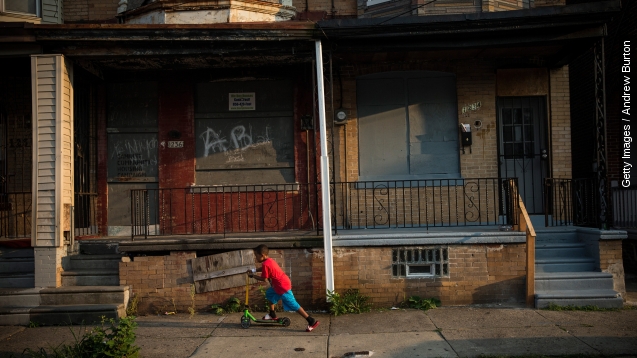 Living below the poverty line reduces brain volume in areas associated with learning, according to a new joint study from three universities.

A study by researchers from universities in Michigan, Wisconsin and North Carolina found poverty can diminish the brain's gray matter — the tissue that processes information.

The reduction in gray matter volume was found throughout the brain but most noticeably in the frontal lobe, temporal lobe and hippocampus –– areas tied to learning.

The researchers found children in a home at one-and-a-half times the federal poverty rate had 3 to 4 percent less gray matter than the average child, and that number more than doubled once a household went below the poverty level.

That had a very real effect in the classroom. Children from low-income households scored four to seven points lower on standardized tests compared to children with higher socio-economic statuses.

The U.S. Census Bureau put the poverty rate for children just under 20 percent in its most recent 2013 finding. The researchers behind the gray matter finding have a pretty controversial solution though.

They argued funding should be increased for programs that help those below the poverty line — but the effectiveness of those programs has been debated.

The Head Start program said its funding has been reduced the past few years, leading to 53,000 children being cut from the program. This year, the budget has been restored, but future cuts are feared.