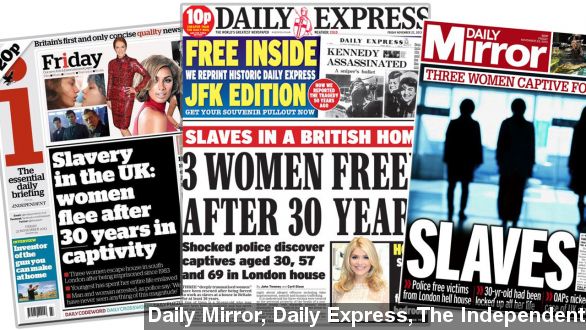 Police say the three women who were rescued are highly traumatized and were kept in horrific condition.

Police have released new details in the London slave story. Three women were rescued in south London last month after allegedly being held as slaves for the past 30 years. They were reportedly kept in horrific conditions.

"All three are described as being highly traumatized. ... It was one of the most horrific things any of us had ever heard of before." (Via BBC)

Police say the women had no real exposure to the outside world, and one of the women may have lived there her entire life.

The Guardian spoke with the founder of a charity organization that helped rescue the women. She says "they felt they were in massive danger," they were "terrified" and they "could never leave the front door."

The women were basically living in forced servitude — a 69-year-old Malaysian woman, a 57-year-old Irish woman and a 30-year-old British woman. (Via The Telegraph)

A man and a woman -- both believed to be in their 60s were arrested in connection to the case. They were charged but then released on bail.

Some in London are calling it one of the worst cases of modern day slavery the country has ever seen. But it went unseen for more than 30 years, and it's bringing the all too real problem of human trafficking to the forefront. (Via CTV)

The UN estimates organized human trafficking to be the third largest global business right behind weapons and drugs.

In London, the problem appears to be getting worse. The UK's top anti-slavery charity says, "hundreds are forced into slavery every day in London" - and arrests for human trafficking are up by 30%. (Via LBC)

Police say the investigation will take tame and the couple that was arrested is due back in court in Janurary.