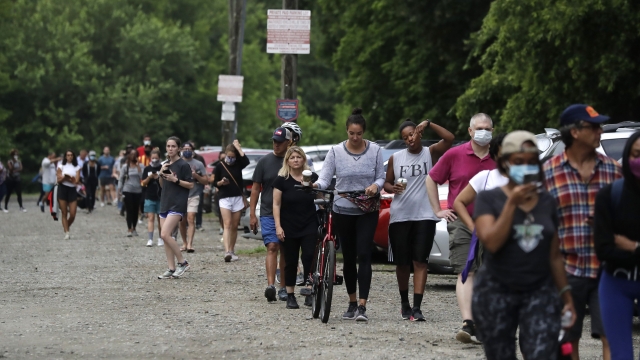 The state had a reduced number of polling locations, and poll workers weren't properly trained to use the state's new voting machines.

After an 11-week delay because of COVID-19, Georgia's primary Election Day was marred by long lines and problematic voting machines.

"I've never seen that many people wait in line for really anything," said Erick Nathan, a Fulton County voter.

Some of the longest lines were reported in the Atlanta area. That's where Erick Nathan waited over three hours with his wife and newborn daughter to vote. He said there was more than one line at his polling location, which caused some confusion. And even after he filled out his ballot, he had to wait some more.

"Actually had to wait in line again. Once you cast your vote and printed your ballot, there was only one place to actually put the ballot in to get it, let it be counted," said Nathan.

But some voters in the same county got lucky.

"When I pulled in, I noticed that there was nobody out here at all. ... So I left my water bottle and my book in my car and walked. Walked in, walked out, it's a very, very, very simple process," said Stephen Synowsky, a Fulton County voter.

"Secretary of state did not adequately train people. They're needlessly complicated. There are three separate machines people have to use. There's a check-in machine, there's a voting machine and there's a scanning machine. All of these require IT expertise, which is more than most poll workers can do," said Dreyer.

Georgia's speaker of the House has already promised to investigate. In a statement, Rep. David Ralston said the state's House Governmental Affairs Committee will look into what he called "unacceptable deficiencies" with Tuesday's primary.

The long lines are also likely to delay the primary results. Georgia's secretary of state previously said he would not release any results until the last precinct has closed. That means winners might not be known for days.