Audits, Recounts And Lawsuits: Why We're Still Looking At 2020 Ballots 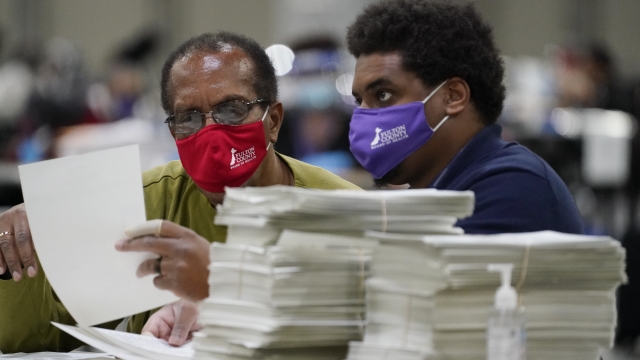 A handful of states are still examining 2020 election ballots. Experts worry that continued challenges are eroding confidence for future elections.

Seven months after the 2020 election, ballots are still under the microscope in a handful of states, and election experts worry the continued challenges are eroding confidence in our elections.

"Just because January 6 happened and the insurrectionists were not successful, we are not out of the woods yet on this. And the longer that this kind of farce audit and continued questioning of the election is allowed to continue, the more danger that we are in," said Arizona Secretary of State Katie Hobbs.

In Arizona, the state Senate launched an audit in Maricopa County in April. But the voting machines had already been tested twice, and the 2.1 million ballots were already subject to three audits. All of those checks showed the 2020 election results were fair and accurate. But Maricopa County's ballots are undergoing yet another inspection.

"Do you know what they're looking for? Or what they think they're going to find?"

"I think at the end of the day, what this is designed to do is continue to undermine the integrity of our elections, put questions in people's minds that they can't trust future elections, and lay the groundwork for not only doing this in other states with regard to the 2020 election, but setting up future election challenges," said Hobbs.

Arizona isn't alone. The Speaker of the Wisconsin Assembly hired former police officers to investigate the 2020 election. Cheboygan County, Michigan officials want to allow an outside group to audit their voting machines.

And in Georgia, a group of residents filed a lawsuit to get access to Fulton County's mail-in ballots.

"We don't know until we've actually seen them. But there appear to be tens of thousands that could be potentially counterfeit. And that could have been enough to switch the results here in Georgia," said Garland Favorito, one of the petitioners in the Fulton County case.

They believe examining ballot markings and paper folds will prove that fraudulent votes were counted. But David Becker from the Center for Election Innovation & Research says benign reasons could explain what they think is fraud.

"There are tons of reasons ballots might not be folded. It might be that a mail ballot was actually returned by hand. And it might be that it was returned in a different kind of envelope that was given," said David Becker, Executive Director and Founder of the Center for Election Innovation and Research.

Favorito's case relies on affidavits, as did many of the lawsuits related to the 2020 election. The people who signed those sworn statements presumably believe the accusations they're making are true, but affidavits that haven't been cross-examined or analyzed aren't exactly hard evidence.

"Everyone who's looked at these affidavits, every court has found that the people didn't know what they were talking about. They didn't actually allege anything that was fraudulent or a problem, or they actually got facts wrong," said Becker.

Georgia Secretary of State Brad Raffensperger is confident in the 2020 election results. His office completed a Risk Limiting Audit which included a hand count of the state's 5 million ballots. But he supports the citizen effort in Fulton County, saying the ballot inspection would "provide another layer of transparency."

Small discrepancies are to be expected with election audits, but sometimes they can uncover concerning errors. That's what happened in Windham, New Hampshire, with a race for state representative. Out of 10,000 ballots cast, the initial recount found 300 more votes for some candidates, and 100 less for another. The investigation determined the problem stemmed from how the ballots were folded.

All told, none of the various recounts, audits or legal challenges have impacted the results of the presidential election. Experts say that should give voters more confidence, not less.

"We're seeing better vote-casting methods with paper ballots. We're seeing more audits with better methodology. Things are trending in the right direction. So the evidence is all stacked in, yes, our elections are getting more secure," said Ben Adida, the executive director of VotingWorks.

Despite that, polling shows large numbers of Republican voters still don't trust the 2020 election results. And it so far seems unlikely any number of audits or recounts will change that.

"It happens in a democracy — there's a winning side and there's a losing side. But I think it has to start with truth. And to be honest, also that benefits the losing side. A side that has lost an election, and then misdiagnoses the reason that they lost, is doomed to continue losing elections," said Becker.