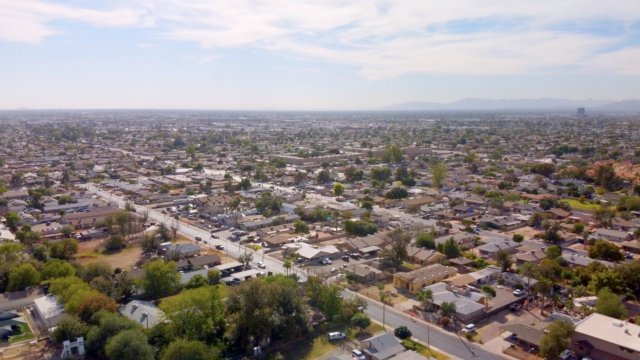 It might seem strange to have a chat about heat at the start of night in early December. But for David Martinez, the timing is perfect — because he knows it’s not permanent.

"That heat ends up coming, and once it’s here, it really takes a lot out of you," Martinez said.

Martinez’ neighborhood in Mesa, Arizona is part of a heat island. In a region known for triple-digit temps, his area is among those hit hardest even in the winter. Trees are sparse, sidewalks aren’t shaded and too often the community goes unheard.

"A lot of the kids after they get dropped off by the bus or whatever, they still have to walk from Point A to Point B," Martinez said.

In metropolitan Phoenix, heat can surface in December, but heat islands exist everywhere. A new study by Climate Central found cities like Baltimore, Cleveland, and Detroit – cool-weather cities with still-brutal summers – have among the most intense heat islands in the country. Within cities, the differences can be even greater.

Dr. David Hondula is a researcher at Arizona State University.

Masavi Perea led the way in the area.

"During the day it’s hot, but during the night... still hot. It doesn’t cool off," Perea said. "I told them, 'Hey, let's work about the heat. What do you think about the heat?' And they would say, 'Well, we live in the desert south Phoenix. It is what it is.' Unfortunately many people have lost hope of government, and they don’t trust government."

That’s the challenge. Projects produce reports and sketches, hopes and plans to make things better. Then priorities change, a pandemic happens and solutions stay on the shelf.

"I think when we look all across the country at underserved communities, the conversation between City Hall and those neighborhoods has not been as vibrant or productive as it could have been," Dr. Hondula said.

"I look at heat as a year-round challenge," Mayor Gallego said. “Phoenix created the first in the nation, publicly funded Office of Heat. We have to go to our residents and say, ‘Here’s what we’re accomplishing for you.’”

"Our office is charged to think about the heat problem as an equity one," Dr. Hondula said. “The scale of resources that we're going to need to pull together to move the needle on some of these huge challenges. It just is a little intimidatingly large.”

A new office and a new officeholder do not by themselves create change. The next few years will be a test after the seeds have been planted.

But for David Martinez and so many, the sun and the summer always loom.

I know, eventually, it’s gonna end up coming back," Martinez said. "I mean, it’s really beautiful now, but, you know, we live here in Arizona, so we know what to expect and what’s coming.”